Khalid Ben Omar Souleyman (Arab: خالد بن عمر سليمان) was the victim in All the King's Horses (Case #49 of Grimsborough).

Souleyman was the crowned king of Sultanistan. He was from the Souleyman Royal Family of Sultanistan. King Souleyman had black hair and brown eyes. He donned a white keffiyeh with a green and gold band on his head, and wore a thawb of the same color. He also wore golden chains.

Jones and the player found King Souleyman dead in the horse stables of the city's Horse Riding League. Nathan confirmed that the king's skull was smashed by a horse's hooves. He then clarified that the killer had frightened the horse, causing it to rear up and kill the king.

King Souleyman had a son named Mohammad Souleyman, who he obviously spoiled. He also hired Hilda Tipton to be a nanny to Mohammad and to treat him to a proper education as well. King Souleyman was also good friends with Mayor Howard Johnson, even bringing the mayor a hookah and the horse that would ultimately kill him as gifts. Furthermore, King Souleyman helped fund Mayor Johnson by making a private donation to the Horse Riding League which it then relayed to the mayor's campaign, despite the rules against foreign donations. Tony Marconi had also discovered the reason behind the King's visit, which was presumably to make the donation. Furthermore, the King was also friends with Archibald Ashworth, who stopped making contact with him after he got into the oil business which threatened the lives of his bees.

The killer turned out to be Hilda.

Hilda was dissatisfied that the King did not trust her to have her guidance in making political decisions for Sultanistan. In contrast, as Mohammad completely trusted her, Hilda resorted to assassinating King Souleyman so that she could have Mohammad, who would listen to her advice, installed as King. She then proceeded to rob a beehive from the orchard near the stables and lit a firecracker inside, sending bees toward the King's horse, which would eventually trample the King to death. Judge Hall then filled up a report and let the International Court deal with Hilda. 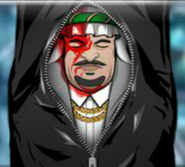 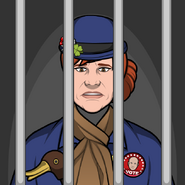 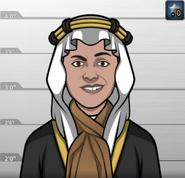 Mohammad Souleyman, Khalid's son.
Add a photo to this gallery

Retrieved from "https://criminalcasegame.fandom.com/wiki/Khalid_Souleyman?oldid=451198"
Community content is available under CC-BY-SA unless otherwise noted.