Kevin Parker was a suspect in the murder investigations of the Lone Roses' lead singer, Olly Oliver, in Killing Me Softly (Case #33 of Grimsborough) and cosplayer Joe Turner in The Reaper and the Geek (Case #37 of Grimsborough).

Kevin is a 36-year-old man with black long hair and brown eyes.

In his first appearance, Kevin has a ponytail that sits on his right shoulder. He wears nerd glasses that is black in the edges. He also wears a red short-sleeves t-shirt. Around his neck, he sports a brown scarf clothing with a paisley motif. It is known that Kevin is a musician and eats roasted peanuts.

In his second appearance, Kevin wears make-up, a green wig, and a long toy ear. He also wears a brown super-hero costume with a light-brown cape, and a crossbow with the same color behind it. Around his neck, he wears a convention nametag. It is discovered that he uses prosthetic glue and wears makeup.

Kevin was a comic shop owner who was first interrogated after a hacker named The @rtist told Jones and the player on video-chat that Olly Oliver's secret admirer (who was friends with the victim on Friendnet) had last accessed their Friendnet profile from Kevin's Comic Book Shop, where anyone could access the computer for free. When asked about the torn defaced poster of Olly they had found in his shop, Kevin told the team that he was the one who had torn the poster. He further said that he was a fan of Olly and wanted him to sign this limited edition poster at the Lone Roses' concert the previous night. But for some reason, the victim refused to give Kevin an autograph and mocked him. Kevin was then heartbroken and came back to his shop, where he unleashed his wrath on the poster. Kevin was later again spoken to by the team to ask him whether he had seen Irma Anderson, who had run away from her Diner and had gone missing from the very day. Kevin answered that he and Irma were friends and that she had been in his shop all afternoon and was still there. The team then approached Irma and asked her about the incident.

Kevin returns after the murder of a Cosplayer named Joe Turner at the Grimsborough Sci-fi Fantasy Festival. The team interrogated Kevin since he owned a stand next to the statue where the victim was found impaled. When spoken to about victim, Kevin told the team that he hated Joe and that they had been rivals since kindergarten. Kevin was then again spoken to about the Meet and Greet with Bruce Anderson (a B-movies actor), since Alex was a huge fan of Bruce and he was really excited to ask Kevin what he missed. Kevin was very happy and could not believe that he had just seen Bruce. Alex then asked Kevin why he hated Joe so much. He answered that they had an argument once, about a rare figurine both of them tried to buy. Unfortunately for Kevin, Joe then won the bet and he used to come to Kevin's comic shop every day to gloat. Since then, Kevin hated the victim a lot. 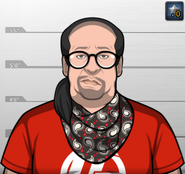 Kevin, as he appeared in Killing Me Softly (Case #33 of Grimsborough). 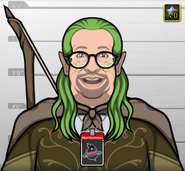 Kevin, as he appeared in The Reaper and the Geek (Case #37 of Grimsborough). 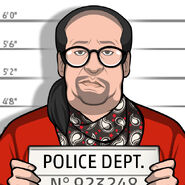 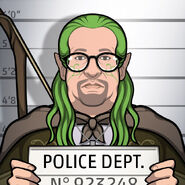 Retrieved from "https://criminalcasegame.fandom.com/wiki/Kevin_Parker?oldid=516356"
Community content is available under CC-BY-SA unless otherwise noted.