Kevin was a Grimsborough University philosophy professor with balding grey hair, a mustache, a beard, a pair of glasses over his black eyes and wrinkles. He was seen wearing a white collared shirt with a dark blue tie underneath a brown Stockinette stitch vest that had a pocket in which there was a blue pen. He was the author of two books: Is 42 the Answer? and The Philosophy of Economics, the latter of which he co-wrote with René. Additionally, Kevin was seen holding a book concerning Plato.

In his first suspect appearance, it is known that Kevin was left-handed, used Moist Mitts and played Counter Compassion.

In his second suspect appearance, it is discovered that he had watched A-Wind Up Satsuma and ate porridge.

Kevin became a suspect after Jones and the player found a book about the philosophy of economics, which was written by Kevin and the victim, René Narcisse. After knowing that Kevin and the victim wrote the book together, the team went to talk to Kevin. After expressing his sadness to the victim's death, Kevin told the team that co-writing a book with the victim was the greatest intellectual experience of his life. In the end of the conversation, Kevin told the team that he would have let them know any important information about the victim if he had remembered some.

Later, Kevin was spoken to again after the team found a slide projector in the victim's lecture hall and learned that René had been proposing to cut the philosophy department's budget and spend the money on his own economics department. Answering about this, Kevin angrily told the team that René did not just want to cut his funding, he wanted to undermine philosophy, calling that it was a dead subject. Kevin then admitted that co-writing the book with the victim was in truth a disaster as he always said that philosophy was useless.

Kevin was later found to be innocent after the team incarcerated Isabella Narcisse for the murder of René. However, Gloria and the player then talked to Kevin once again about Rozetta Pierre and Ad Astra. When being asked about this, Kevin nervously claimed that Ad Astra was just an "old study group" that convened in his classroom. He then hurriedly left the team, saying that he had a lecture to give.

After arresting Stephanie Griff's killer, Gloria and the player confronted him about his involvement in Ad Astra. After being identified as the inspiration behind the society, he explained that Ad Astra had started as a group of talented kids who would discuss the future together. However, he grew uncomfortable with the direction their conversations were going as he claimed that selective superiority was an age-old theoretical concept that should never be put into practice. When Gloria tried to get him to reveal the identities of the current members of the society, he claimed that he had been done with Ad Astra for years.

Kevin became a suspect again after Gloria and the player found his neighborhood watch sign. After Gloria asked him about the victim, he complained about Gregory's noisy party. Gloria then informed him of Gregory's murder, to which he said that he was sorry for him, but admitted that he would cherish the peace and quiet.

Kevin was spoken to again about his note to the victim. He informed the team that he had been inspired to study the behavior of the university students in order to identify who was at risk of being murdered. He said that he had asked for the victim's help regarding information on the students, but Gregory had changed his mind as he thought that Kevin was only using him for information for his next book.

Kevin's body was found tied up in the forest, whipped to death. Martine ascertained that Kevin had been whipped between twenty and thirty times, but the shock had killed him before the final blow. She then determined that the ropes that had attached Kevin to the trees had been expertly tied to keep him in place, allowing Martine to conclude that the killer knew how to tie knots.

Later, Jones and the player found a bloody whip in Ad Astra's cave. After sending a sample of the blood on the whip to Amir, Amir confirmed that the blood belonged to Kevin and registered the whip as the murder weapon. He identified traces of chicken bouillon, garlic, onion, salt, and pepper mixed in the blood, which were ingredients for instant ramen seasoning. Since Martine had failed to find instant ramen in Kevin's stomach, Amir concluded that the killer ate instant ramen.

Kevin had Gregory follow Courtney Guerra and her friends, so Courtney threatened to kill him if he did not stop. Lucius Roth broke into Kevin's office, claiming it was to get a book he needed for his thesis that Kevin had checked out. Dorothy Kix planted a recording device in Kevin's office as well.

The killer turned out to be student Polly O'Brien.

Upon admitting to the murder, Polly said that she had chloroformed Kevin in his office, dragged him to the forest unconscious, and whipped him to death upon Rozetta's orders. She also said that she did not know why Lucius falsely confessed to the murder. Judge Powell sentenced her to 35 years in prison.

Post-trial, the team would learn that it was not only Polly who had killed Kevin. All five members of the new Ad Astra were complicit in the murder - Azeeb Patel both monitored Kevin's movements using his hacking skills and helped in transporting Kevin to the forest. Courtney had been the primary agent in ambushing the professor with chloroform. Dorothy had coordinated everyone's movements. Lucius had given a false confession to the police to learn what information they had regarding the murder. All five of the students also took turns whipping Kevin. Azeeb entered a plea deal giving him a 7-year prison sentence while the other three were sentenced to 30 years in prison.

The team also learned that Rozetta had Kevin murdered to ensure that he would not tell the police regarding the identities of her former associates in the old Ad Astra. However, despite the murder, the team were still able to retrieve a half-burned note disclosing that one of Rozetta's old associates was in Spring Fields. 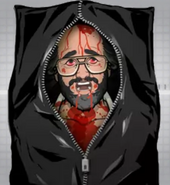 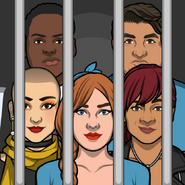 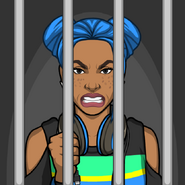 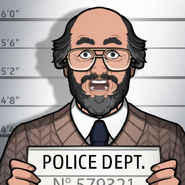 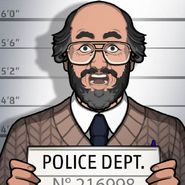 Retrieved from "https://criminalcasegame.fandom.com/wiki/Kevin_Charles?oldid=519171"
Community content is available under CC-BY-SA unless otherwise noted.