Kev was a 20-year-old professional fighter. He had short fair tousled hair and sported many boxing injuries, including a black right eye, a boxer's nose, and a short scar on his left eyebrow. He appeared shirtless, showing off multiple tattoos, most notably tattoos of hearts with the words "Mother" and "Ever" on his right shoulder surrounded by flowers, and a tattoo of a woman in red lingerie on his left shoulder. He also wore brown boxing gloves tied and draped around his neck, over his shoulders. It is known that Kev knew how to fight, used hair powder and drank Connemara whiskey.

At the time of his death, he wore a black-and-white striped prison uniform.

Kev became a suspect after the player and Maddie found a wooden sign in the fight club underneath the bar. He did confirm that he had fought in that fight club, despite saying that his memory isn't exactly the best. When asked if he knew the victim, he said he never did as he felt he never needed any doctors; mostly because he believed he was the best fighter in Concordia.

Kev was spoken to again about medication the victim prescribed for him. Though he remembered seeing the victim, he threw the bottle away because he felt he would not need any medicine since he is the best fighter in Concordia. However, the victim was trying to get him to stop fighting, out of risk for Kev's life, but Kev outright refused saying fighting was his life.

In the end, Kev was proven to be responsible for Barnaby's murder. Kev denied involvement but soon admitted to the crime. While he also admitted to be part of Mad Dog's gang, he said that he punched Barnaby to death with brass knuckles because the doctor was engaged to his beloved Marla de Paradis. He then branded Barnaby with a shamrock-shaped iron for good luck. Judge Lawson sentenced him to 20 years of forced labor in Stonewall Prison, without parole.

After the trial, Kev was spoken to again about information regarding Mad Dog and the Irish gang. Although Kev refused to say anything, he did let slip the fact that Mad Dog regularly drank with him behind the pub. This prompted the player and Isaac to search the cabaret street again for more evidence of Mad Dog.

Kev was found in Stonewall Prison's yard with his head bashed in and his middle finger missing. Per Dick, the killer smashed Kev in the head with a blunt object and cut his finger off post-mortem. The coroner also found traces of chewing tobacco on Kev's uniform, which meant that the killer chewed tobacco.

In the gold mine, the team found a bloody iron bar. Per Rose, it was the murder weapon since it matched with Kev's bruises. By looking at the blood stains' patterns, Rose concluded that the killer performed the hit with his right hand, meaning the killer was right-handed.

Prison warden Jeremiah Shankshaw sympathized with Kev and made it his duty to take him under his wing and keep him on the straight and narrow. Prison guard Cosimo Silvestri allowed Kev and a few other prisoners to fight, threatening Kev to win as he had cast bets on him. Fellow prisoner Colin James planned to break out of prison with Kev, but grew tired of him bragging about his escape plan. Mine owner Dorothy McBain slapped Kev after he stole gold from her mine during his mandatory prison labor.

The killer was revealed to be Jeremiah.

After denying involvement, Jeremiah admitted to the crime. He hit Kev in the head with an iron bar because the Italian mafia wanted the Stonewall free of the Irish and threatened to kill his family if he did not perform the hit, hence confirming the Italian influence on the prison. He then cut off his finger as a warning to other inmates. As Jeremiah refused to give further details, Judge Lawson sentenced him to 25 years in jail. 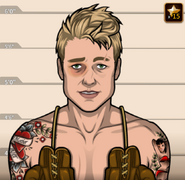 Kev, as he appeared in Sinners and Saints (Case #19 of Mysteries of the Past). 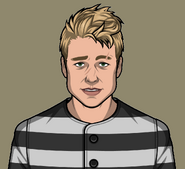 Kev, as he appeared in Death Without Parole (Case #25 of Mysteries of the Past) and wearing the prison uniform. 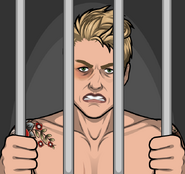 Kev, sentenced to 20 years in prison for the murder of Barnaby Wilson. 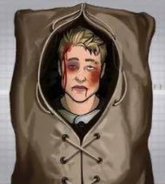 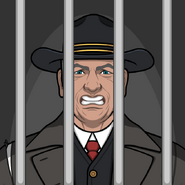 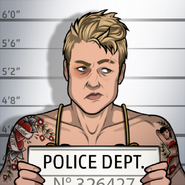 Retrieved from "https://criminalcasegame.fandom.com/wiki/Kev_O%27Connell?oldid=469083"
Community content is available under CC-BY-SA unless otherwise noted.