Kerry Ann Buxton (1977–2013) was a suspect in the murder investigation of her husband, CEO Hank Buxton, in The Scent of Death (Case #44 of Grimsborough). She was then murdered in A Shot of Beauty (Case #45 of Grimsborough).

Kerry Ann was a 36-year-old woman with blonde hair and green eyes. She donned a red dress with a brown belt in the waist area and a golden necklace with three rubies, and also sported blue eye shadow and red lipstick. It is known that Kerry Ann had manicured hands, wore pantyhose and used hair removal cream.

Jones and the player interrogated her for the first time when the team investigated the prime crime scene (Garden Rooftop), found a wallet with a wedding picture of Hank and Kerry Ann, and did not hesitate to talk to the widow. During the marriage, Kerry Ann was instructed not to sign any pre-nups by her mother's request, and she feared the worst because if she stopped being Hank's wife: she would lose her fortune, and she could not go back to modeling since her breast work was ruined at Mexico, but pre-nups only apply if the couple were to divorce. Kerry Ann was infuriated when the team needed to gather any information about any possible affairs and/or possessions Hank might have had in his life, which the team knew that Kerry Ann was protective of Hank. Kerry Ann somewhat was not clear on her discussion.

When the team talked to Lola Vallez for the first time, it became clear that Kerry Ann's marriage to the victim was strained because of the photos at the rooftop matched the description of the aforementioned singer. It was also said that Kerry Ann disapproved Hank's admiration of Lola.

The team eventually found a pill box at the "Wine Cellar" crime scene and had Grace analyze the pills. Grace told the team that Hank administered these super strength sedatives to Kerry Ann by having her assume they were vitamins so he could control her. However, Grace also informed the team that long-term use could make the patient psychotic. This made the team assume that Kerry Ann would be the killer of her husband against her own will (like what happened to Ophelia Lincoln in The Summoning), and the team had to talk to her regarding about the sedative. Kerry Ann only knew that she had an argument with Hank since he would not let Kerry Ann wear pantyhose, but at the same time admitted to the team she had manicured nails. The team were annoyed since they suspected Kerry Ann having a memory problem, which made it hard for the team to determine whether or not she was telling the truth. After time, Chief King informed the team that Kerry Ann was attacking a woman in Maple Heights Country Club, who was Lola Vallez. She knew Lola was having an affair with her own husband, so she wanted to fight her. Lola said that Hank was blackmailing her so that she could be his cover girl.

Kerry Ann was proven innocent after Peggy Buxton was indicted and incarcerated for Hank's death. The team found Kerry Ann very difficult to work with when the team had to check up on her during the Additional Investigation as mandated by the chief, even though the purpose of such was to check up on how Kerry Ann was doing since her husband's passing.

Kerry Ann was found dead with syringes all over her bloated face in the swimming pool of the Buxton Mansion. The team sent her body to Nathan, who said that Kerry Ann suffered 57 collagen injections to the face that stiffened the skin, which slowly choked her to death. After Nathan concluded that the collagen came from Greene PharmaCorp, he showed the player the killer's shoeprint embedded on her chest, which the team used to deduce that the killer wore PLIGMA sneakers.

Hank's granddaughter, Jamie Buxton, was cooking up a lawsuit to disinherit Kerry Ann from Hank's fortune. However, the lawyers thought the case was hopeless and that Hank really did love Kerry Ann. Despite being married, Kerry Ann had been dating professional wrestler Tom Norris, who said that Kerry Ann brought out his sensitive side. Mayor Howard Johnson also had a crush on Kerry Ann, which helped boost his drive to win the mayoral elections. Meanwhile, in order to shock the public, Kerry Ann had posed nude in front of photographer Dwayne Vermont. Kerry Ann had also withdrawn all her shares from Greene PharmaCorp, causing a huge drop in stocks that only stabilized after her death.

The killer turned out to be Tom.

Tom admitted that he had learned of Kerry Ann's nude photoshoot, who was in disbelief as he thought she would not be capable of such scandals. He then went to her mansion to show her that she would not be hot and pretty again even with all the collagen in the world. After seeing her feeding herself delusions about her attractiveness, Tom then injected multiple collagen syringes in her face and then kicked her into the pool to watch her die. After declaring that Kerry Ann had been corrupted by the environment in Maple Heights, Tom was sentenced by Judge Hall to 20 years in prison. 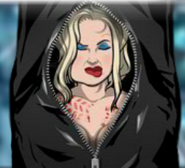 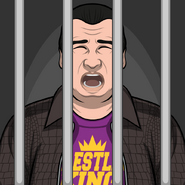 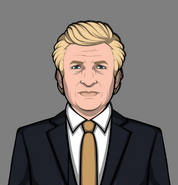 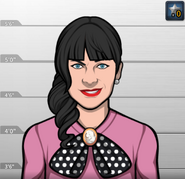 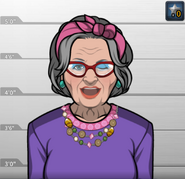 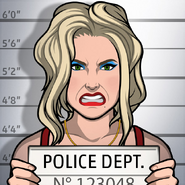 Retrieved from "https://criminalcasegame.fandom.com/wiki/Kerry_Ann_Buxton?oldid=534981"
Community content is available under CC-BY-SA unless otherwise noted.