Kelly Speltz was a suspect in the murder investigation of journalist Rachel Priest in The Secret Experiments (Case #21 of Grimsborough).

Kelly is a 61-year-old scientist with dark brown hair and brown eyes. Kelly is seen wearing lab glasses on top of her forehead and a white lab coat. Underneath it, she wears a blue t-shirt which contains a chemical stain. It is known that Kelly happens to own a guard dog.

When Jones and the player were searching Alden Greene's office, they found a blue substance on a stained carpet. After the substance was analyzed, Grace said that it was same substance that killed the victim, Rachel Priest, and that she had never seen a serum like that before. Grace also said that she tested the serum on a mouse, and after a while, the mouse turned into a kind of monster, thus revealing that the serum to turn human into monsters really did exist. Grace then suggested the team to interrogate Kelly as she would have been the only person who had created the "super" serum. She was known for her illegal experiments, such as the two-headed goat she created.

Later, the team found a paper sheet beside the operating table in the experiment room. The sheet contained a scientific formula with Kelly's initials on it. The formula was of a serum that made the bones of a human being grow excessively and turned them into a "war machine" (e.g. Drake Ribbs). When Jones angrily told Kelly that the scientific formula proved that she had created the serum that killed Rachel, Kelly said that she hoped Rachel was not injected with her serum since it only worked on men and that she could not imagine what the effects would be if the serum was injected into a woman's body.

Afterwards, in Additional Investigation, there were news that Kelly was doing illegal experiments on chimps. When asked about this, Kelly denied. So the team searched the experiment room for clues. There, they found animal hairs on a lab coat and gave it to Grace for analysis. After completing the analysis, Grace confirmed the team that those hairs were chimp hairs. Since testing on chimps was banned in the United States in 2012, the team went straight to Kelly and arrested her for breaking the law. 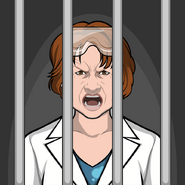 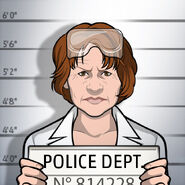 Retrieved from "https://criminalcasegame.fandom.com/wiki/Kelly_Speltz?oldid=485968"
Community content is available under CC-BY-SA unless otherwise noted.