Keith Vaughan was a suspect in the murder investigations of scientist Ernesto Vega in Death in My Hand (Case #34 of The Conspiracy) and former mobster Tony Marconi in Up in Flames (Case #36 of The Conspiracy).

In his first appearance, Keith is seen having a blue stain on his right shirt sleeve. Additionally, he is seen holding a flashlight. It is known that Keith wears hiking boots and uses scar ointment.

In his second appearance, it is discovered that he eats dark chocolate.

Keith became a suspect after he discovered Dr Ernesto's body and reported it to Tony Marconi, his boss. When being taken statements by Jones and the player, Keith explained that he found the body at the lakeside near the dome while patrolling in the forest. He then told the police that he did not know the victim well as DreamLife would not let him, as well as other Hawk Eye Security employees go inside the dome and talk to their personnel. However, in the end of the conversation, Keith said that Ernesto was one of the few DreamLife personnel who were authorized to leave the dome for research purposes. And in order to leave the dome to work outside, Ernesto had to exit the dome's security checkpoint, prompting Jones and the player to go there for more clues.

Keith was then interrogated again after Amir identified Keith's scar ointment on the victim's fake book which had a message and a bottle of gin inside. When Jones and the player asked Keith about the message on the book, he told the team that it was just a little side business. As alcohol was strictly forbidden under the dome because CEO Rozetta Pierre thought it poisoned the mind, Keith had helped Ernesto to get some. However, he then angrily said that Ernesto started to get reckless as he wanted Keith to bring in more alcohol for other people and said that there was big bucks in it. But Keith knew that they would get caught, so he decided to write a message to Ernesto, saying that this was getting too risky. In the end of the conversation, Jones hoped that Keith was not the one who silenced him.

Later, Keith was found to be innocent as Zoe Kusama was revealed to be the killer of Dr Ernesto.

During the conversation with DreamLife CEO Rozetta Pierre, she had told Gloria and the player that she had recruited Tony Marconi and his men, including Keith, to get rid of the bodies of DreamLife's experiment subjects. The team then went to Keith and arrested him for his involvement. Then, when being asked to tell what Hawk Eye Security did with the bodies, Keith said that they had burned the bodies in an industrial incinerator after smuggling them out of the dome in the dead of night. In the end of the conversation, Keith was shocked after being informed of his boss' murder.

Gloria and the player then went to Keith's cell and talked to him again after they discovered that Keith had doctored Hawk Eye Security's photo to show him in Tony's place as the boss. When being asked about this, Keith admitted that he deserved to be the boss more than Tony, who kept complaining about the dirty work that Rozetta sent to them. Keith then told the team that he had tried to please Rozetta so that she would get Tony fired and that he could become the boss of Hawk Eye Security, however, Keith did not success.

Later, Keith was found to be innocent for his boss' murder as the team found Emilio Fuller responsible for the crime. However, he's still arrested for his involvement in DreamLife's dirty work. 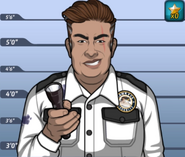 Keith, as he appeared in Death in My Hand (Case #34 of The Conspiracy). 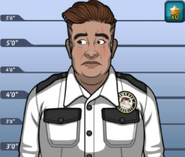 Keith, as he appeared in Up in Flames (Case #36 of The Conspiracy). 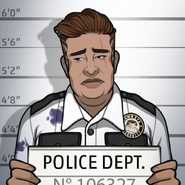 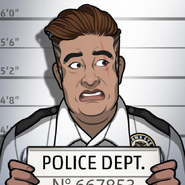 Retrieved from "https://criminalcasegame.fandom.com/wiki/Keith_Vaughan?oldid=477821"
Community content is available under CC-BY-SA unless otherwise noted.