Kayla was a 27-year-old assassin from SOMBRA's "next level" program. She had shoulder-length curly blonde hair swept to the left, and also had yellow eyes due to being experimented upon. At the time of her death, she donned a white sleeveless shirt with a gold pin on it, blue denim pants, and a dark blue scarf with white triangle patterns.

Kayla was found in a Zulu village just fished out of a well with her hands and feet tied together. Angela confirmed her cause of death was by drowning. Furthermore, she was knocked out then tied up before being thrown in. Because of that, she managed to find traces of melktert between the victim's skin and the rope. According to Dupont, melktert translates into milk tart, and is a local dessert made from milk, flour, sugar, and eggs. This meant the killer ate melktert.

Kayla was dating her long-time best friend, Kwanele Mthembu, before she disappeared due to SOMBRA's hunt and next level programs, wherein her intelligence was enhanced. She then began pushing a "smarter" or "more sophisticated" lifestyle on Kwanele. This, combined with Kayla's frequent disappearances due to her job as an assassin, prompted Kwanele to break up with her when she arrived back in South Africa from the SOMBRA island.

Her latest mission was to assassinate Prince Abioye of Soweto in a Zulu village. She became friends with villager Thembisile Ndlovu to gain insider info. As president of the yacht club, she also attended a fundraising yacht party which Abioye and his bodyguard, Willem Nieuwoudt, attended. She tried sweettalking Willem into giving Abioye's schedule details, but instead he had stolen her ID to run a background check on her. They had lost the ID by the time they arrived in the village, however.

The killer turned out to be Kwanele.

After denying involvement, Kwanele admitted he killed Kayla. After learning of Kayla's induced superintelligence, Kwanele wanted to be a SOMBRA assassin, but she said he was too old. Wanting to prove his worth for the organization, he tied Kayla up, drowned her in the well, and tried to murder Abioye. Judge Adaku sentenced him to 30 years in prison for the murder of Kayla Pieterse and the attempted murder of Prince Abioye. 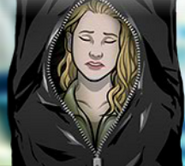 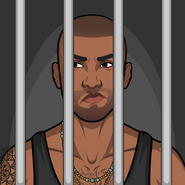 Kwanele Mthembu, Kayla's ex-boyfriend and killer.
Add a photo to this gallery

Retrieved from "https://criminalcasegame.fandom.com/wiki/Kayla_Pieterse?oldid=531552"
Community content is available under CC-BY-SA unless otherwise noted.