Kate Murphy was a suspect in the murder investigation of her ex-boyfriend, stock trader Samuel Rye, in Blood on the Trading Floor (Case #12 of Grimsborough).

Kate is a 28-year-old casino employee who works at Greene Casino. She has long jet black hair wrapped around in a ponytail. She has green eyes. She wears a white shirt and a red tie underneath a khaki waistcoat with the Greene Casino logo and a golden Sagittarius badge. It is known that Kate uses dental floss and face cream and is a Sagittarius.

When investigating the trading floor where the victim was found hung, emptied of all his insides, Jones and the player found a note which had Kate's fingerprints all over it. They went to the Casino and spoke to her about Samuel and how she knew him. She said that they were in a relationship, but eventually broke up because Samuel loved money more than Kate.

Kate was later arrested by Ramirez for breaking into Gecko Street Station. She wanted to speak to the team. She confessed that she sold barbiturates to the stock traders at their parties. For this reason, the team took a look around the station once again. Later, after Harry Krane was arrested for the murder of Samuel, Kate requested the team's help to take a look around the "Abandoned Subway Platforms" crime scene. After investigating the scene thoroughly, the team found a key inside a trash bag. They then handed the key to Kate, who was thankful to the team as she had been looking for it everywhere. 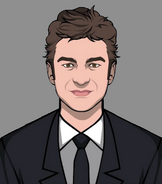 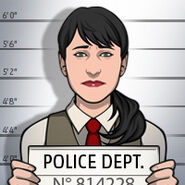 Retrieved from "https://criminalcasegame.fandom.com/wiki/Kate_Murphy?oldid=481620"
Community content is available under CC-BY-SA unless otherwise noted.