Karimah Breen was a suspect in the murder investigation of quarterback Troy Takiguchi in Dead Man Running (Case #34 of Grimsborough).

Karimah is a 32-year-old nurse with long shoulder-length black hair with split ends at the bottom and side swept bangs. She commonly wears pink lipstick and a beige jumper with a curled neck top. She wears a typical white lab coat with a stethoscope around her neck. Karimah also wears a Grimsborough University badge. She has a grass stain on her left shoulder. It is known that Karimah drinks sports drinks and eats spicy food.

Karimah was first spoken to about the break-in at her infirmary where they found a vial of EPO inside the fridge. She told Jones and the player that she never stored such products and that nothing was missing from her stocks, which meant that the burglar had actually left the EPO bottle behind.

Karimah became a prime suspect of murder when the Quails' coach, Franklin Caldwell informed the team that she had a criminal record for producing students with doping hormones in the past. However, the Dean had then decided to give her a second chance and Karimah kept her job. But the incident was put on her record, and as a result, she had to pay $7,000.

When asked about this incident, Karimah told the team that it had taken place four years ago, when she supplied a student with some anabolic steroids. She had tried to explain to the student that it was wrong, but he was desperate and really wanted to get stronger. Karimah, without any other choice, had to dope him because she did not want her students to buy black market drugs on the internet since getting them from her was much safer.

Karimah was proven innocent after Franklin was convicted of the murder. However, Karimah was mentioned during Franklin's arrest, in which Franklin explained to the team that he had stolen the EPO from the infirmary to mix it with Troy's insulin, and when he realized that they were getting closer to the truth, he broke in the infirmary and returned the EPO to frame Karimah. 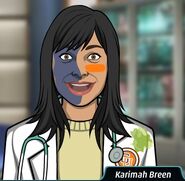 Karimah, as she appeared in Additional Investigation, wearing face paint. 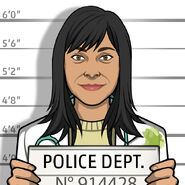 Retrieved from "https://criminalcasegame.fandom.com/wiki/Karimah_Breen?oldid=476656"
Community content is available under CC-BY-SA unless otherwise noted.