Karen Knight (also referred to as "The 6th Man"; 1960–2015), appearing as a recurring character in Season 2 of Criminal Case, was a suspect in the murder investigations of four people before being murdered in The Sting of Death (Case #58 of Pacific Bay). She also made brief appearances in two other cases in Pacific Bay.

Karen was a 55-year-old businesswoman who also was the vice president, then CEO of Meteor Systems. She also happened to be the ex-wife of Frank, one of the player's former partners. She had short blonde hair, green eyes, purple nail polish, and white earrings. She wore a black suit jacket over a red shirt and with a handkerchief on her right side and a Meteor Systems badge on her left.

In her first appearance, Karen had an oil stain on her right shoulder. It was known that Karen was a gambler and knew mechanics.

In her second appearance, the oil stain was gone and it was discovered that she used hand weights, ate sushi and used rejuvenating cream.

In her third appearance, it was revealed that she knew binary and played chess.

In her fourth appearance, it was noted that she knew electronics and drank whiskey.

Frank and the player talked with Karen after Yann finished analyzing a hand cream sample with her DNA in it. She went on to remember the last time they met, where Frank lost a bet for returning to his home. When asked about Annette Arbor, she said they were good friends and were working on the Robot Act together. Karen said this would have helped the both of them, Annette would be famous and Karen would be rich.

Karen was due for another interrogation after the team managed to find an order given to Karen by Meteor Systems to deal with the victim. When she was confronted with the memo, she replied saying the victim wanted to give the robots power. Meteor Systems only wanted the robots to be accepted, saying that no one would want the robots if they asked for wages. When Frank suggested she could be the killer, Karen said that her bosses only wanted her to talk to Annette, nothing more.

Karen was found innocent when the team incarcerated Larry Newark for the mayor's murder, but the team was not finished talking to her yet. The team managed to find a proposal allowing for the mass production of robots. The only issue with it would be that there would be more robots than humans in Innovation Valley, all produced and controlled by Meteor Systems. Hannah managed to find it was written by Karen, so Frank and the player went to speak with her. When they confronted her about the contract, she said that Frank always refused that kind of progression. Karen also said there was nothing to fear and that robots are a good thing.

Karen was brought into another investigation when the player and Amy found an order for 200 jellyfish she signed. Considering they were the murder weapon, it warranted another chat with her. Karen said she signed the invoice because Teresa Turing wanted to study them in the underwater lab. She also said that Teresa wanted to replicate their ability to regenerate so she could make humans immortal. Karen was shocked to hear of Teresa's death, and wanted to ensure her own safety considering the previous investigation of their prior CEO.

She was spoken to again after hearing an announcement that she would take over as Meteor Systems' CEO, and that she would cancel all of Teresa's experiments. Amy was surprised to hear of this rapid change of development, but she replied saying she had been carrying the weight of the company for years. She said that Meteor Systems needed someone with a clear progressive direction, and that she had nothing to do with Teresa's death.

Karen was found innocent again after the team incarcerated the victim's mother, Greta Meduse. However, she was briefly spoken to again about Meteor Systems researching cyborgs. After finding a document about the creation of cyborg dogs, and an analysis from Hannah, they thought this went against Karen's vision for the company. Karen said that this was the first time she heard of it, and that she cannot oversee every single experiment. She admitted she was lost due to the murder investigations of Ernest and Teresa Turing, and gave the team free reign over the lab to find more evidence on the cyborg experiment.

Karen was flagged as a suspect for a third time when the player and Amy found a recording of her saying to inform security of any sighting of Bob Levene, who happened to be the victim. Karen said that she fired him because she thought he did not fit the company anymore, but he would not go away and kept trespassing. Although furious at him, she was still surprised to hear of Bob's death.

Karen was spoken to again after the team found a briefcase filled with money from her to victim, with a note saying to "hush up and walk away". When asked about the money and note, Karen replied saying that Bob was spreading lies about Meteor Systems conducting evil schemes. Amy thought that giving him so much money was a tad suspicious, but Karen said that rumors like that can ruin a company. But Bob refused the money, and Karen feared that his rumors would end up dragging Meteor Systems into the mud.

Karen was found to be innocent for a third time after the team arrested Aphro-Dyte, but she helped play a major role in saving Innovation Valley from nanobot infestation. When the player and Frank came to Karen for help on stopping Aphro-Dyte, she offered her help through the use of an electro-pulse bomb, that way Aphro-Dyte could be deleted from the system. The bomb would send out an electro-magnetic wave, rendering any and all electronics useless. The team went to the helipad to retrieve the bomb, and after unlocking the bomb, Hannah activated it and the team successfully managed to take down Aphro-Dyte.

A Killer Among Us

Karen was interrogated once again after she was caught having an affair with Frank. Amy was suspicious since Karen had access to the armory and Danny Moto's killer stole several items from said armory. While Karen argued she never killed anyone, Amy still found it suspicious how she suddenly got back together with Frank. She argued that when Frank started working with the player, he had changed and she started to care for him in return.

Karen was spoken to again after they found that she was at Danny's trial. Karen said that the only reason she went was because she was representing Meteor Systems, where Danny worked as an intern. She thought he was a horrible worker and of course fired him as a result, but went to his trial to make sure he did not say anything about Meteor Systems; especially considering the recent events that occurred in Innovation Valley. Karen then said that any suspicion put towards her should be put towards their team members, but Amy replied saying that she was not off the hook yet.

While Karen was innocent of Danny's murder, she was not happy when she found out that Frank was found guilty of manslaughter. Before Frank's trial began, Karen kidnapped Andrea Marquez off-screen, and upon Frank's transfer to the Pacific Bay Penitentiary, she entered the courthouse with a gun pointed at the Chief's head, hijacking the courthouse. Karen threatened to kill Andrea if the bailiff did not let Frank go, but Amy threatened to shoot Karen if she did not let the Chief go. Andrea painstakingly ordered Amy and the bailiff to let Frank go, halting the violence and allowing Frank to flee from captivity, but before she had her demand met, she dropped a bomb in which she revealed that she was the one behind the heist at the Mennagio Casino.

With Frank and Karen flagged as fugitives, Amy and the player had to continue their pursuit at a desolate district called the Wastes.

Karen did not appear until the last minute, but according to intel, she represented Meteor Systems to vouch for the release of Trevor Neuman so the embattered psychologist could continue Albert Tesla's "brain machine" work in one of the company's abandoned laboratories. Moreso Karen told Amy not to draw the gun as she sought to hold both the junior officer and the player prisoners at one of Meteor Systems' laboratories.

Karen was discovered dead with scorpions moving over her body shortly after she took Amy and the player prisoners to one of Meteor Systems' laboratories in the Wastes. After finishing her autopsy, Roxie deduced Karen was killed by multiple scorpion stings—filing the scorpions as the murder weapon. Roxie also found traces of hair in Karen's eye sockets, which were left by the killer after removing her eyes. A subsequent study revealed the hair came from a cat, which meant the killer has a cat.

The GIA was working with Meteor Systems on developing alien technology. When Karen stole the technology, the GIA pulled out of the collaboration and Agent Z was tasked to erase all traces of the GIA's involvement in Meteor Systems. Karen had also been powering up Tesla's supercomputer form. Karen had reprimanded Dr Rascher for performing calculations that would contribute to the end of Pacific Bay. Grimsborough convict Alden Greene was bailed out to supervise Karen and the rest of Meteor Systems on a big project being worked on by the company. Karen tried to stop Alden as "their plan was going too far", but Alden refused to back down.

The killer turned out to be Alden.

Alden revealed that Karen had no vision of the future. He also revealed that he destroyed Pacific Bay so his "master" could give him "the most priceless gift of all". Before he could give any more details, he was shot down by Frank.

After locking up Frank, Frank said that their eldest daughter, Laura, was run over. The grief proved too much to bear, leading to Frank's alcoholism and divorce. However, just a few months prior to the case, his other daughter Daisy fell into an irreversible coma due to meningitis. Karen and Frank rekindled due to the tragedy. He then stated that Karen stole the plutonium to power up a supercomputer where they could upload Daisy's consciousness into. Realizing that the plutonium was meant to destruct Pacific Bay, Karen wanted to put a stop to the plan and kidnapped Amy and the player so they could get inside headquarters and investigate.

Karen and the rest of the Knight family were uploaded into Tesla's virtual utopia after all their deaths in Tesla's desperate attempt to stop the team from destroying him and his utopia. However, the Knight family only encouraged Amy and the player to kill Tesla, which they rightfully did. 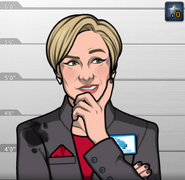 Karen, as she appeared in Uncivil Rights (Case #47 of Pacific Bay). 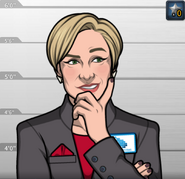 Karen, as she appeared in Immortal Sin (Case #49 of Pacific Bay). 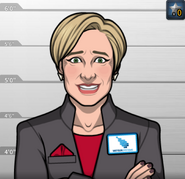 Karen, as she appeared in Programmed to Kill (Case #50 of Pacific Bay). 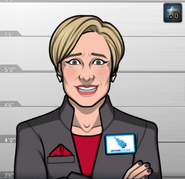 Karen, as she appeared in A Killer Among Us (Case #56 of Pacific Bay). 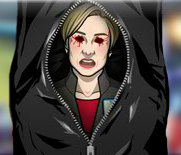 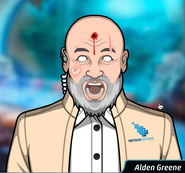 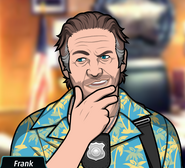 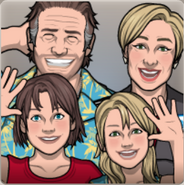 The Knight family, bidding a farewell in Tesla's Virtual Utopia. 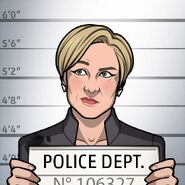 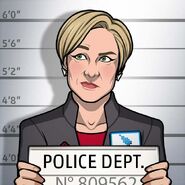 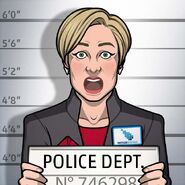 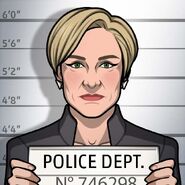 Retrieved from "https://criminalcasegame.fandom.com/wiki/Karen_Knight?oldid=509559"
Community content is available under CC-BY-SA unless otherwise noted.