Karen Boulder was the victim in The Lost City (Case #19 of The Conspiracy).

Karen was an archaeologist with blonde hair in an orange headband tied back in a ponytail and brown eyes. At the time of her death, she wore a pale yellow jacket over a lime-green T-shirt with a name tag reading her name, beige pants, green galoshes, and a brown shoulder strap containing a trowel, a chisel, and a brush.

Karen was found at the evacuation site of the lost city of Xerda with a black substance leaking from her mouth. Upon autopsy, Martine found out that the black substance was tar, and that the killer had tied her up before force-feeding her with it until she suffocated, confirming it as the murder weapon. She also noted that the composition of the tar proved that killer had made it themselves, thus concluding that the killer must have been a survivalist.

Karen was found to have been insulted by an apron given to her by her colleague, archeologist Bruno Camper, who claimed that despite Karen’s ambitions to be an archeologist, it was men who had led explorations and made discoveries and not women. Karen had also mocked cultist Skylar Sage (who had tried to convert Karen) by saying that wisdom came from science and explorations, not by wearing robes and playing with crystals. Karen was also snippy to bureaucrat and city hall employee Theresa Cole because she had to wait for her paperwork to be cleared. This led Theresa to hire a private eye to see if he could catch Karen doing anything illegal. Karen had also wanted to banish comic book artist Marcus Butler from the dig despite Marcus wanting to use the inspiration for his superhero saga. Karen had also told her former university history professor Ray Parker that his history lectures were “boring” and that she would file an official complaint, leading Ray to get depressed and resign in order to save his sanity.

The killer turned out to be Theresa.

Upon admitting to the murder, Theresa said that she was exhausted from all the people hounding her ever since Xerda was discovered, and that she wanted Xerda gone to get her life back. One sleep-deprived night, she thought that an unsolved, strange murder would scare everyone from the site and would force the dig to be shut down. On her next visit to the dig, she snuck up on Karen, tied her up, and then pumped her home-made tar into her throat till she had suffocated. Judge Powell sentenced Theresa to 10 years in prison with mandatory counseling. 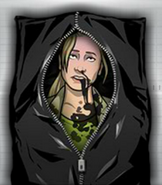 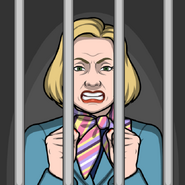 Theresa Cole, Karen's killer.
Add a photo to this gallery

Retrieved from "https://criminalcasegame.fandom.com/wiki/Karen_Boulder?oldid=488255"
Community content is available under CC-BY-SA unless otherwise noted.