Kara Naylon was a suspect in the murder investigation of Unified Nations envoy Niilo Virtanen in Double Trouble (Case #52 of World Edition).

Kara is the 52-year-old CEO of Bearing Straight. She has black hair tied into a bun, black eyes, red glasses, a gold necklace, and gold clam-shaped earrings. She usually dons a red dress underneath a winter-camo suit with a golden crossed rifle badge. It is known that Kara eats king crab, reads Jack London and spends time with Alaskan malamutes.

Kara became a suspect after the player and Carmen found that the murder weapon was owned by her company. Carmen found it suspicious that she did not show up for the inspection, but Kara brushed it off saying that she was just busy and her company had nothing to hide. When informed of her company's implications in Niilo's death, she said they had nothing to do with it. Once the evidence was brought up, she was surprised to hear that it was stolen and used in a murder.

Kara was interrogated again by the player and Jonah regarding a photo of her at a USNay rally. She said she was allowed to believe in whatever she wanted to believe in, and she believed the UN had no place in inspecting her facility. It was for that reason she did not show up for the inspection, saying neither the UN nor the US was the boss of her or her company.

Despite her political opinions, Kara was found innocent after the team incarcerated Joel Heller for Niilo's murder. 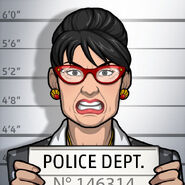 Retrieved from "https://criminalcasegame.fandom.com/wiki/Kara_Naylon?oldid=506338"
Community content is available under CC-BY-SA unless otherwise noted.