Kang[a] is a 30-year-old TV show host. He has short blond hair and wears purple glasses and an earpiece. He dons a flashy purple and gold suit over a black-collared shirt with a matching gold tie. Several logos of TV show "Oh! Crazy Kids!" are seen in his outfit. It is known that Kang plays hwatu, eats kimchi and sings karaoke.

Kang found himself in the red after Carmen and the player revealed him as the one utilizing Gwak's credit card after the latter's death. He said the victim allowed him to use it, and was also grateful to Gwak for giving him the chance to be a TV host. However, he was shocked to hear of Gwak's death, which he thought explained why he did not show up for their game of hwatu.

Kang was interrogated again regarding sequins from his suit on a message from the victim saying he was fired. He confirmed the victim wanted him off, saying Gwak thought new blood would bring up the ratings. But instead of being angry, Kang said he was fine with it because it allowed him to make the jump to working in films instead, which delighted him.

Despite that, the evidence later pointed to Kang as Gwak's killer. After trying to pin the crime on K-pop idol SILVERee, Kang admitted that he stabbed the victim with an ice pick. He lost a game of hwatu with a gang that Gwak had previously exposed on air. The gang agreed that Gwak's murder would pay off the debt. Judge Adaku sentenced him to 25 years in prison. 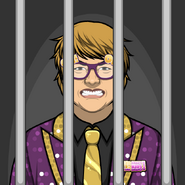 Kang, sentenced to 25 years in jail for the murder of Gwak Sung-ho. 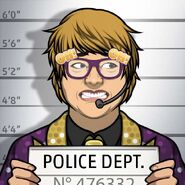 Retrieved from "https://criminalcasegame.fandom.com/wiki/Kang_Dong-yun?oldid=454995"
Community content is available under CC-BY-SA unless otherwise noted.