Dr. Kane Glazebrook was a suspect in the murder investigation of climate change activist Julia Lloyd in Ice Rage (Case #43 of World Edition).

Kane is a 42-year-old penguin researcher working in Antarctica. He has short brown hair under a cranberry red cap, half-moon glasses with an additional attachment and frostbite on his nose and cheeks. He dons a sandstone coat lined with an animal fur over a medium sea green sweater. It is known that Kane eats beef jerky and goes kayaking.

Kane became a suspect after the player and Jack found his mug shattered with lipstick on it. He blamed the victim for taking his things, but he barely even spoke to the victim due to him hardly leaving the lab because of his research. Though Jack questioned why he was in such a rush, Kane explained he needed to get a years worth of experimentation done before the summer in the South Pole ends in four months; so he had no time for small chat with the other researchers.

Kane was spoken to again about the victim's keycard found in his cooler. He said that the victim was bugging him constantly, asking him to explain his research. Though he understood her enthusiasm, he felt he did not have any time to waste. In order to stop her from coming, the only thing he could do was take away her access pass, that way he could continue his research in peace. When Jack suggested he killed her so he could be left in peace, Kane laughed saying he had no time for murder.

Kane was found innocent after the team arrested Blair Carpenter for Julia's murder. Jack and the player spoke with him again in order to re-establish communication with the mainland. He agreed to help since his lab's systems were taken down by the snowstorm as well. He suggested they search the supply ship to find a transmitter and have someone who's good with technology get it to work, so they headed there to do just that. 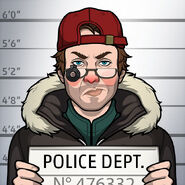 Retrieved from "https://criminalcasegame.fandom.com/wiki/Kane_Glazebrook?oldid=408491"
Community content is available under CC-BY-SA unless otherwise noted.