Kalua Kaboom was the victim in Murder on the Dance Floor (Case #15 of The Conspiracy).

A DJ at the Blue Flamingo nightclub, Kalua had long red hair tied up in a ponytail and brown eyes. At the time of her death, she wore a red plaid tank top that exposed her stomach, as well as a pair of short jeans. She also sported a pair of gray-blue headphones around her neck, silver eye glitter, red lipstick, a green and red star tattoo on her chest, and multiple tattoos on her arm. It is known that Kalua was gluten-intolerant and a vegan.

Kalua's body was found inside the club with a large wound across her face and neck. Upon autopsy, Martine said that Kalua was electrocuted to death with an extremely high-voltage jolt of electricity to the neck, killing her almost instantly. Furthermore, the victim's necklace was ripped off while she was being zapped to death by her killer, who left a trail of waffle pop crumbs on her in the process. Because Kalua was intolerant to gluten, Martine concluded that the killer ate waffle pops.

The detectives later found an electroshock gun inside a shopping bag at the Waterside Market. Rita was able to verify it as the murder weapon, saying it gave off a charge that was high enough to cause cardiac arrest. She revealed that she had found blue flecks on the gun that came from nail polish, which led Rita to conclude that the killer wore nail polish.

Kalua was revealed to have accidentally caused one of partygoer Robyn Ash’s squad friends to have a seizure, which ruined Robyn’s 21st birthday party. Kalua had also threatened her boss of the Blue Flamingo, reformed mobster Tony Marconi to give her a pay raise or she would leave to work for another nightclub. Kalua had also partnered with musician Teddy Brooks in an album before she left him high and dry to go on as a solo DJ. Kalua had also angered records store employee Ziggy Sparks by remixing the classics with electronic beats and going on crazy rants, which included hating cheese, angering cheesemaker Tallulah Shropshire as she had paid Kalua good money to be the face of her cheese brand.

The killer turned out to be Robyn.

Upon admitting to the murder, Robyn explained that when she had hired Kalua to play at her 21st birthday party, she made her promise not to use strobe lighting during the party because her little sister, Piper, suffered from epilepsy. During the party, however, Kalua broke her promise, inducing a fatal seizure from Piper. With her sister's death being ruled as an accident and without money to file a case against Kalua, Robyn decided to exact revenge by killing her instead. She snuck into the nightclub during Kalua's rehearsals and shocked her with a high-voltage stun gun. Judge Powell sentenced Robyn to 7 years in prison. 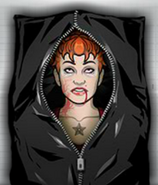 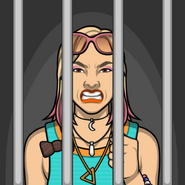 Robyn Ash, Kalua's killer.
Add a photo to this gallery

Retrieved from "https://criminalcasegame.fandom.com/wiki/Kalua_Kaboom?oldid=477874"
Community content is available under CC-BY-SA unless otherwise noted.