Kai is a 35-year-old patient of the Bromden Psychiatric Hospital. He has short black hair, a five o'clock shadow, and eye bags. He wears a standard white hospital gown with a diamond pattern. Additionally, his skin is gray and his right pupil is bigger than his left.

In his suspect appearance, he is seen holding his lava lamp, Benny. It is known that Kai uses mouthwash, has a mite allergy and does crosswords.

After arresting Fred Drucker's killer, Gloria and the player checked Lab 15-J and found a plaque of him and DreamLife CEO Rozetta Pierre celebrating the dome's opening. The team (per Cathy) then found out he was interned in the Bromden Psychiatric Hospital. After talking to Catherine Kelly, the dome therapist who signed Gruber's transfer to Bromden, and taking Kai's lava lamp per her advice, the team talked to Kai, who was paranoid of Rozetta tracking him down and hurting him.

Kai became a suspect after Gloria and the player found his drawing and realized that he was a resident at the same psychiatric hospital as the victim. When asked if he knew Zoe, he consulted Benny Lava, his lava lamp, and remembered that she would often share her pudding with him. However, before Gloria could inform him that Zoe had been killed, Kai interrupted her, prompting the team to end their line of questioning.

Kai was spoken to again about his threat to the victim. He told the team that Zoe was at the hospital to kill him and that she had been sent by DreamLife. He claimed that she had tried to poison his mouthwash and that Benny Lava had told him to kill her. However, he denied doing so.

Kai was found to be innocent after the team incarcerated Louis Leroux for Zoe's murder. 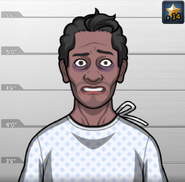 Kai, as he appeared in Domesday (Case #31 of The Conspiracy). 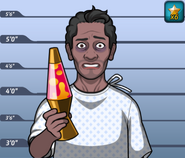 Kai, as he appeared in Head Case (Case #52 of The Conspiracy). 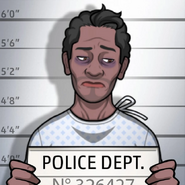 Retrieved from "https://criminalcasegame.fandom.com/wiki/Kai_Gruber?oldid=474735"
Community content is available under CC-BY-SA unless otherwise noted.