Jyunpei Ōyama (Jpn: 大山順平) was the killer of Shogun Yoshinobu Gojo in A Slice of Death (Case #29 of Travel in Time).

Jyunpei is a 48-year-old samurai with short black hair and a mole by the right side of his lip. He wears a blue pinstripe kimono over white wraps and sports a brown straw hat. Additionally, he carries two katanas at his side, one with a red handle, the other with a blue handle. It is known that Jyunpei knows kenjutsu, worships the White Snake Goddess and drinks green tea.

Jyunpei became a suspect after the victim's wife, Tokiko Gojo, pointed Jack and the player in his direction. Jack told him about the murder, shocking him. They asked him about the shogun's enemies, prompting him to reveal that, although the shogun had multiple enemies, he did not know who wanted him dead.

Jyunpei was spoken to again about how the statue that the victim had given him ended up broken. He told the team that he saw no honor in ransacking and murdering a village of innocents under the command of the shogun. Horrified by his actions, he smashed the shogun's gift.

In the end, it was proven that Jyunpei was Shogun Gojo's killer. Jyunpei admitted that he wanted to retire from his service as the samurai and become a pacifist monk. Every time he asked permission from Shogun Gojo to let him go however, the Shogun refused to let him retire given his efficiency. In order to peacefully retire and save innocents from himself, Jyunpei sliced the shogun in half. The team surrendered him to the shogun's wife, Tokiko Gojo, to which Jyunpei accepted that he would have to commit seppuku as punishment. 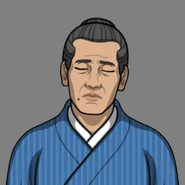 Jyunpei, accepting to commit seppuku as the punishment for the murder of Shogun Yoshinobu Gojo.
Add a photo to this gallery

Retrieved from "https://criminalcasegame.fandom.com/wiki/Jyunpei_Oyama?oldid=511091"
Community content is available under CC-BY-SA unless otherwise noted.