Julia was the 36-year-old (now-former) CEO of AgriMeadows, an agribusiness company. She had wavy blonde hair and sported red lipstick and orange nail polish. She was seen wearing a white blouse underneath a feather-patterned jacket with an AgriMeadows employee pin on the left side of her jacket, and a blue skirt. Also, she sported pearl earrings and was seen holding her phone in her left hand.

In her first suspect appearance, it is known that Julia used sunscreen.

In her second suspect appearance, it is discovered that she used eye drops, wore work boots and are cotton candy.

In her quasi-suspect appearance, she sported an orange prison uniform with a white shirt.

In her third suspect appearance, Julia was seen wearing her first outfit. It is revealed that she was a sharpshooter, was allergic to shellfish, read Modern Hunter magazine and was claustrophobic.

In her minor appearances, Julia was seen wearing a bulletproof vest.

Julia became a suspect after Jones and the player found her auction paddle at the scene of the crime. After making her hypochondria aware, Julia was questioned about the murder, where she identified her as a cheesemaker working at GrimFoods. This prompted the team to investigate the victim's workshop.

Julia was spoken to again about the victim refusing her job offer. After the team interrupted her phone conversation, she informed them that the victim was the best cheesemaker at the time, which was why AgriMeadows offered her a job. However, the victim refused and the company was able to find other cheesemakers. Jones then suggested that Julia had gotten rid of the competition, to which she replied that AgriMeadows had no need to fear GrimFoods.

Julia was found to be innocent after the team incarcerated Tallulah Shropshire for Debby's murder.

Julia became a suspect again after Gloria and the player (per exterminator Harley Sackville) learned about Corn Fest. She was told about the murder and asked about the victim, to which she told them that the victim was a low-grade employee who made up for her lack of ambition with hard work. Julia was then asked about Fornax, which she claimed to know nothing about. Gloria then told her that they had proof that the destruction of the cornfields was engineered from inside AgriMeadows, which Julia promised to investigate.

Julia was spoken to again about the victim's threatening letter to her. Remembering more about the victim, she explained that the AgriMeadows had given Christy a compassionate leave after the death of her fiancé, Deputy Sheriff Gus McGuff. However, when she came back, she complained that she wanted longer leave and threatened to take AgriMeadows' secrets to GrimFoods, their competitor.

Julia was found to be innocent again after the team incarcerated Abel Dreschner for Christy's murder. Later, she was arrested by Gloria and the player after the team learned that she was Fornax, one of the original members of Ad Astra. After presenting the proof that Julia had planned to distribute Protozane-infused corn to turn the population into sheeple, Julia was arrested for criminal conspiracy.

After making their preparations, Gloria, Rita and the player confronted Ad Astra. Julia forced the team to retreat by showing them that she had taken Carter Hayes and Jake Hayes (Gloria's son and ex-husband, respectively) hostage using her poison gas.

Julia became a suspect for the third time after Jones and the player discovered her hideout. Attempting to subdue the team with her poisonous gas, Jones and the player informed her that her gas would not infiltrate their gas masks, causing Julia to accept defeat. When asked why she was not hiding in the Ad Astra hideout, she told the team that the hideout made her feel claustrophobic, prompting her to hide out at her family's farmhouse. Jones then told Julia about the murder, sending her into disbelief. She was then taken into custody.

Julia was spoken to again about the victim's rejection of her advances. Furious about her imprisonment, she was asked how she felt about Christian's rejection. She confessed that she was crazy about him, but he would often rebuke and insult her. She then told the team that she had left the hideout in order to get away from him.

Julia was found to be innocent for the third time after the team incarcerated Joe Warren for Christian's murder.

Julia joined Joe and Rozetta in an attempt to face off against Denise Daniels and her invincible neohumans. During the showdown, the Ad Astrans learned that the neohumans were invincible even to their own superpowers. When Denise shot Rozetta, Julia and Joe promised to continue the fight for their friend. However, one of the neohumans set off a grenade, destroying the dome to bring down Julia and Joe. Julia was killed in the explosion, with the police discovering her body after the smoke settled in the dome. 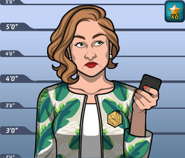 Julia, as she appeared in Breaking News (Case #54 of The Conspiracy) and wearing the prison uniform. 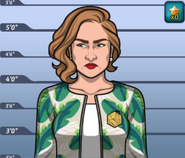 Julia, as she appeared in Reap What You Sow (Case #57 of The Conspiracy). 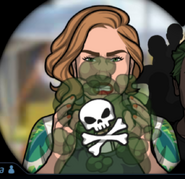 Julia, as she appeared in Eve of Disaster (Case #59 of The Conspiracy). 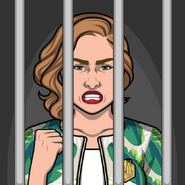 Julia, arrested for criminal conspiracy to distribute contaminated corn to the population and for conspiring against public order.

Julia, killed in an explosion caused by Denise Daniels' neohumans, her body being held by Rita Estevez. 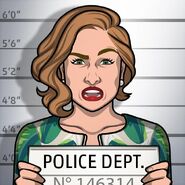 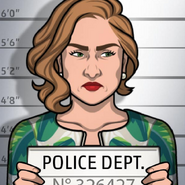 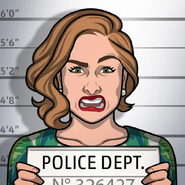