Jude Jenkins was a suspect during the murder investigation of chess player Casper Rove in Checkmate (Case #14 of Mysteries of the Past).

Jude is an 11-year-old orphan with short blond hair. He wears a green shirt with yellow designs under a brown jacket that has an oil stain on it. Additionally, he wears a dark blue scarf.

Jude became a suspect after a drawing was found of him and the victim that Jude had drawn. He said that he and the victims were friends, as the latter taught him chess. He remembered it as it was the first adult who had shown interest in him, ever since his parents had died in a big fire. Since then Jude always felt invisible, until Casper asked if he wanted to learn how to play chess and snuck him in the exhibition to watch him play against the automaton.

Jude was spoken to again when Isaac and the player found his cap in the film set, where Jude had claimed that he never went into. Jude said that Casper had taken him there during the exhibition. They pretended to have a sword fight and Jude pretended to stab Casper in the heart. Jude said the sword was fake and swore that he never would kill Casper.

Jude was later found innocent after Bron Sklar was incarcerated for Casper's murder. 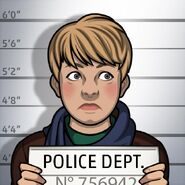 Retrieved from "https://criminalcasegame.fandom.com/wiki/Jude_Jenkins?oldid=415354"
Community content is available under CC-BY-SA unless otherwise noted.