Josie Picket was a suspect in the murder investigation of model Emma Ternon in The Kiss of Death (Case #16 of Grimsborough).

Josie is an 85-year-old woman with curly gray hair and dark brown round glasses. She wears a black and brown dress, poker chips-shaped earrings and red lipstick. It is known that Josie eats sushi and uses lip balm and anti-aging cream.

Josie was an old, retired woman, who came into the case when the player and Jones were searching the casino's top floor. There, they found a torn photograph. When they pieced it back together, they saw that the picture was of the victim, Emma Ternon arguing with an unknown man. At that moment, Josie came and told the team that she was the one who had taken that photo because she wanted to do a magic spell on Emma which would kill her.

Later on, the team again went to quiz Josie about the casino. Josie said that Emma had been flirting with a lot of men in the casino and that one of them had even proposed to her and gifted her a diamond ring, but Emma had refused. Later, it was discovered that the man who had proposed to Emma was a plastic surgeon named Richard Dobbs. 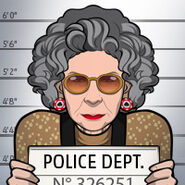 Retrieved from "https://criminalcasegame.fandom.com/wiki/Josie_Picket?oldid=489405"
Community content is available under CC-BY-SA unless otherwise noted.