Josh Anderson was a suspect in the murder investigation of first-year student Rani Goshwalla in Murder on Campus (Case #32 of Grimsborough).

Josh is a 21-year-old drama student at Grimsborough University with dark brown eyes and light brown hair combed to his right side. He dons a light pink t-shirt with a messy collar and the first two buttons undone. On the left side of his shirt, there is a logo of a horse rearing. It is known that Josh eats frozen yogurt, drinks champagne and takes Vitamin C supplements.

Josh was interrogated after Jones and the player saw a viral video that was posted online in which he claimed to have slept with Rani, who studied at the same university. He was drunk and told the team that he had met Rani in the Eisenhower Amphitheater, where the two made passionate love and then slept together. He further said that it was a fraternity tradition and that they used to initiate first-year students into the ways of college, then they filmed their stories. He then told the team that someone else had leaked his video online.

Josh was interrogated once again after the team found a threat note on the campus lawn which read, "Rani, you talk, you die, Josh." After intimidating him and saying that they were going to arrest him, Josh got scared and spilled out the truth. He explained to the team that Rani had caught him kissing another boy outside the Amphitheater the previous day, revealing himself to be gay. He then had to plead with Rani to keep it a secret, but the victim refused. So Josh leaked the viral video online in which he falsely claimed to have slept with Rani, so that it would damage the victim's reputation and no one would ever believe her if she revealed the truth about Josh.

Josh was later found to be innocent after the team incarcerated Misha Goshwalla for Rani's murder. 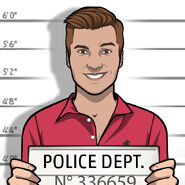 Retrieved from "https://criminalcasegame.fandom.com/wiki/Josh_Anderson?oldid=476652"
Community content is available under CC-BY-SA unless otherwise noted.