Joseph Pryor was the victim in Talk of the Town (Case #41 of Mysteries of the Past).

Joseph was a gossip journalist for the Concordian Gazette. He had brown hair and green eyes. He usually wore a dark gray shirt underneath a black coat, and held a notepad and a pen. At the time of his death, he donned a white and orange stripped swimming costume.

Joseph's body was found by the Grand Concordia Hotel swimming pool, with severe chemical burns to the throat. Per Dick, Joseph died a painful death after his killer added sulfuric acid to his food or drink, filing the acid as the murder weapon. The coroner deduced that the killer had access to acid to kill Joseph the way they did.

During another visit to the swimming pool, Maddie and the player found two empty ice cream glasses. Per Viola, one of them contained sulfuric acid, leading her to believe it was the glass Joseph ate from. Since the other glass was also empty, Viola deduced that the killer ate ice cream.

Joseph's work as a gossip journalist often offended the subjects of his articles, one of which was Bernadine Rochester, as he had claimed that she was having multiple affairs with members of her golf club. Hotel bartender Bert Tucker fell in love with Joseph after he kept romancing him, but found out when he confessed his feelings that Joseph only got close to him to learn about all the gossip he had. Joseph had learned that Hector Harvey's law degree was fake and blackmailed him to defend him for free. Joseph's father, Erwin was disappointed that he was not writing serious articles but rather gossip articles. Joseph's colleague, Katherine Woolf, was mad at Joseph for stealing her original ideas for articles only to distort it to cheap gossip.

The killer turned out to be Hector.

After admitting to the murder, Hector revealed that Joseph was forcing him to defend him in a case against Hector's sister, who he had written a scandalous article about. Knowing he could not refuse, Hector then resolved to putting sulfuric acid in his ice cream to kill him. Judge Lawson sentenced him to 25 years in jail. 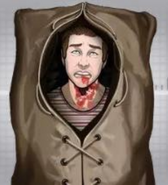 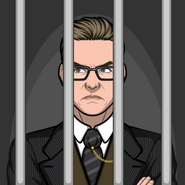 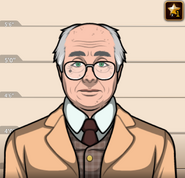 Erwin Pryor, Joseph's father.
Add a photo to this gallery

Retrieved from "https://criminalcasegame.fandom.com/wiki/Joseph_Pryor?oldid=471451"
Community content is available under CC-BY-SA unless otherwise noted.