Joseph Hardcastle was the killer of witch Agnes Leek in Hocus Pocus (Case #23 of Supernatural Investigations).

Joseph is a 64-year old actor working for the Hocus Pocus Museum. He has blue eyes, wrinkles, shoulder-length grey hair and a matching mustache and beard. He wears a black capotain with a golden buckle, a white shirt underneath a black judge's robe, and a brown tie. It is known that Joseph owns a black cat named Sabrina, eats clam chowder and has watched The Crucible.

Joseph became a suspect after Gwen and the player found a reenactment photo of him pointing a gavel at Agnes. Initially in character, he informed the team that he was an actor at the museum. He claimed that Agnes was one of the museum's most cherished visitors and had the VIP privilege of participating in their reenactments. Gwen then told Joseph that Agnes had been murdered, making him wonder why someone wanted to harm her. He then told the team that he was at their service.

Joseph was spoken to again about him emailing the museum's board of directors in an attempt to ban Agnes from the premises. He told the team that she often got drunk on the premises. While he had tolerated her behavior for a while, he snapped when she sabotaged one of his reenactments by walking onto the stage, heckling him and passing out in front of the audience.

In the end, it was proven that Joseph was Agnes' killer. He said that his ancestor, Gregory Hardcastle, was an inquisitor during the witch trials who was cursed to die by the age of 65 by one of the witches he had sentenced to death. Since then, all his descendants had died by a tragic accident on their 65th birthday. Discovering through his research that the witch was Petunia Leek, Agnes' ancestor, Joseph killed Agnes in order to break Petunia's curse so he could live past 65. The team then handed him to the proper authorities. 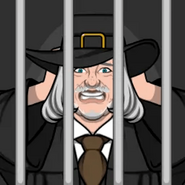 Joseph, handed to the proper authorities for the murder of Agnes Leek.
Add a photo to this gallery

Retrieved from "https://criminalcasegame.fandom.com/wiki/Joseph_Hardcastle?oldid=535207"
Community content is available under CC-BY-SA unless otherwise noted.