Joseph "Bones" Dante was the victim in Overkill (Case #22 of Mysteries of the Past).

Joseph was an Italian gang member who had short black hair and dark brown eyes. He donned a navy blue coat with cream colored lining over a dark blue vest with white and red stripes and a white shirt. He also donned a crocodile green hat.

Joseph was found dead at Sinner's End Park, with foam coming out of his mouth. Per Dick, Joseph died after being stabbed in the back with a knife that was soaked with belladonna, a toxic berry, causing the substance to enter his bloodstream faster. Therefore, belladonna was filed as the murder weapon. The coroner also found traces of sulphur soap in the victim's wounds, which meant that the killer used sulphur soap.

Joseph's brother, fellow gangster Tony "The Scorpion", often rebuked Joseph for purposefully ruffling the Irish's feathers. Irish gangster Eamon Gilligan fought with Joseph in the park and accused him of being the Scarlet Slayer. Apothecary Theodosia Hayhurst prescribed Joseph with an electrical apparatus for his virility. Brothel owner Madam Xiang faced trouble from gang leader Finley Flanagan because she let Joseph into her brothel. Prostitute Gladys Perrin often received gifts from Joseph, although Joseph sometimes got angry when Gladys tried to refuse his gifts, believing that Joseph was growing possessive.

The killer turned out to be Madam Xiang.

Xiang admitted to the murder, saying that Joseph was the last client of every missing prostitute. Believing it to be proof of him being the Scarlet Slayer, she stabbed him with a knife laced with belladonna poison to protect her girls. Judge Lawson sentenced her to 7 years in prison. 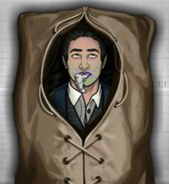 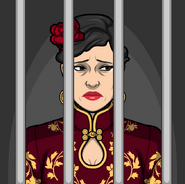 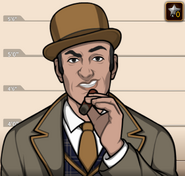 Antonio "The Scorpion" Dante, Joseph's brother.
Add a photo to this gallery

Retrieved from "https://criminalcasegame.fandom.com/wiki/Joseph_Dante?oldid=527664"
Community content is available under CC-BY-SA unless otherwise noted.