Island of the Dolls, Mexico

José Carvallo was a suspect in the murder investigation of hiker Marigold Carson in Hashtag Murder (Case #8 of Supernatural Investigations).

José is a 70-year-old resident of the Island of the Dolls. He has green eyes, wrinkles and disheveled gray hair, a mustache and a beard. He sports an off-white shirt with faded gray patterns under a dark gray, patched-up shawl. Additionally, his clothes are mud-stained. It is known that José knows how to sew, collects spiders and believes Mexican superstitions.

José became a suspect after Gwen and the player were brought to him by Tiffany. He explained that he lived on the Island of the Dolls with Tiffany, his granddaughter. He revealed that the dolls kept them company and that he had built a shrine to honor them. José denied knowing about the murder and then invited the team to join them for tea.

José was spoken to again about his offerings of forgiveness in the doll shrine. He explained that Marigold had made the dolls angry with all of her selfies and was worried that bad things were going to happen because of it. He then urged the team to leave the island.

José was found to be innocent after the team incarcerated Tiffany for Marigold's murder. Later, Ben and the player demanded answers from José about Tiffany being an enchanted doll. He revealed that, in his loneliness, he began to talk to the Tiffany doll. Then one day, Tiffany came to life. He revealed that he knew that Tiffany was dangerous, but he loved her anyway. 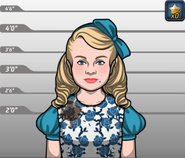 Retrieved from "https://criminalcasegame.fandom.com/wiki/Jos%C3%A9_Carvallo?oldid=515762"
Community content is available under CC-BY-SA unless otherwise noted.