Jon was a 42-year-old guard. He was bald and had black eyes and stubble. He wore a white collared shirt and a black tie under a black blazer with silver buttons. He also wore a white earpiece.

In his first appearance, he was Paul Gigs' bodyguard and was seen having a rash below his left eye. It is known that Jon was a runner, had read User 404 and used protein powder.

In his second appearance, Jon was a security guard working for Grimsborough Power Plants. Additionally, his rash had healed and he wore a transmission tower badge on his left lapel. It is discovered that he was right-handed, ate energy bars and played the electric guitar.

At the time of his death, Jon was a security guard of Space and Aeronautics Research Agency (S.A.R.A.) who guarded the meteorite facility. Per Martine, it was revealed that he had a cat allergy.

Jon became a suspect after Gloria and the player learned that he was the victim's bodyguard. He told them that he had only left the victim to get some breakfast for the two of them and when he came back, he had been informed of the murder. This prompted Gloria and the player to investigate the restaurant Jon had visited. Jon later informed the two of an outburst outside the iPear store.

Jon was spoken to again about one of the victim's torn shirts, which was stained with his protein powder. He told them that Paul had made him angry by treating him like a circus animal, resulting in him tearing up the shirt to exert his anger.

Jon was found to be innocent after the team incarcerated Waldo Gigs for Paul's murder. But he later visited the precinct to ask Gloria and the player to do some digging into Hawk Eye Security, a company that had offered him a job. Per Ramirez, the company was owned by Tony Marconi. After interrogating Tony, Gloria and the player decided to inform Jon about the company and allow him to make his own decision.

Jon became a suspect again after Gloria and the player found him at the scene of the crime. After identifying the victim as his boss, he told the team that he had been knocked out during a conversation with him. When he woke up, he found himself in the blackout next to the victim's body.

Jon was found to be innocent again after the team incarcerated Felix Murray for Ryan's murder.

Jon was found dead in a pool of blood while guarding the meteorite facility, his body strangely deflated. Martine observed that his internal organs had been liquefied, causing them to bleed out of him. She suggested that the murder weapon was a tool used for extracting minerals from rocks using powerful sound frequencies. Martine also found cat hairs on his body, despite him being allergic to cats. This allowed Martine to conclude that the killer had a cat.

Later, Gloria and the player found a strange device hidden in a trash can. Rita identified the device as a sonic mineral extractor and registered it as the murder weapon. From some skin cells left behind on the handle, Rita concluded that the killer was over 40.

In Jon's stint as the power plant guard, he met homeless man Danny Williams, even allowing him to squat there. Jon was in a relationship with nuclear plant director Fiona Maris, pampering her with a lot of gifts. Jon was employed to be the security guard of the Space and Aeronautics Research Agency before his death. S.A.R.A. lawyer Martin Davenport warned against Jon's hiring, claiming it was because he was not confident in his skills as a guard. Nevertheless, when Jon was hired, Martin reduced his workload as he needed to reduce security measures around the meteorite.

The killer turned out to be Martin.

Upon admitting to the murder, Martin told the team that former S.A.R.A. head Denise Daniels had promised him a place in her new world order by enhancing him if he took a piece of the meteorite core for her. He did so, also liquefying Jon's organs with a sonic mineral extractor after he had come across Martin in the middle of his plan. After the team explained to Martin that Denise was just using him, they sent him to court, where Judge Powell sentenced him to 35 years in prison. 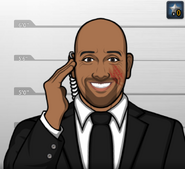 Jon, as he appeared in Gone Pear-Shaped (Case #13 of The Conspiracy). 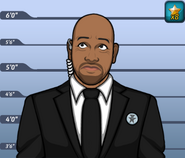 Jon, as he appeared in Lights Out (Case #50 of The Conspiracy). 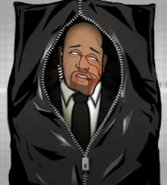 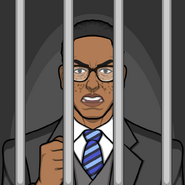 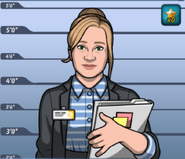 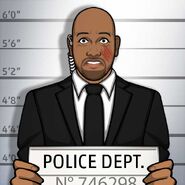 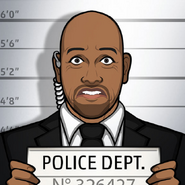 Retrieved from "https://criminalcasegame.fandom.com/wiki/Jon_Benson?oldid=501211"
Community content is available under CC-BY-SA unless otherwise noted.