Johnny Torrents was the killer of Admiral Oliver Oak in Doom Service (Case #47 of Mysteries of the Past).

Johnny is a 37-year-old writer. He has chin length blond hair. He dons a brown coat with black lapels over a striped beige sweater and a white shirt with a green tie. Additionally, he has a mole above his lip and wears glasses. He is seen holding his recent book. It is known that Johnny has pharmaceutical knowledge, has fleas and drinks Corpse Revivers.

Johnny became a suspect after the player and Maddie found a description of the victim he wrote. He had came to the hotel in the first place in order to deal with some writer's block he was dealing with. In regards to the murder, Johnny was already aware of it, but he did not know him personally. Plus, the description he wrote was just mere conjecture, something he liked to do when he saw someone that interested him.

Later, Johnny approached them saying that Oliver's killer was stalking him. He lost them at the hotel bar, so Maddie and the player went to investigate. When they got there, they found it was Evie who was stalking Johnny, hoping to get an autograph for her book. Since Johnny was still a suspect, Evie excused herself and returned to the airship, leaving Maddie and the player to continue their investigation.

Johnny was interrogated again about the medal he received from Oliver. He said he wished he did not know him, but the admiral kept pestering him about making his memoirs. The description he made was an attempt to please him, but even then that did not work, and it only made him lose his concentration on his real work. He just wanted to work on his literature, and was worried his reputation would be affected if he did not make it on time.

In the end, the evidence proved that Johnny was responsible for Oliver's murder. Upon admitting to the murder, Johnny said that he wanted to test if someone could really be frightened to death because he wanted one of his characters to die from fright as well. He swapped the Admiral's medication for his weak heart for hallucinogenic drugs. He then covered a dog in phosphorescent paint and released him in the room. Because of the drugs, the Admiral thought he was seeing a demon, and his resulting fright caused him to have a heart attack. Judge Lawson sentenced him to life in prison. 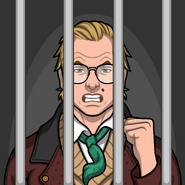 Johnny, sentenced to life in prison for the murder of Oliver Oak. 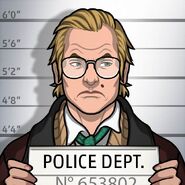 Retrieved from "https://criminalcasegame.fandom.com/wiki/Johnny_Torrents?oldid=415437"
Community content is available under CC-BY-SA unless otherwise noted.