John is a 21-year-old (now-former) rookie cop for the Concordian Police Department with short blond hair and blue eyes.

In his first quasi-suspect appearance, he is seen donning a dark blue police suit with a white shirt and black tie underneath, and a matching cap that has the Concordia Police badge on it.

In his second quasi-suspect appearance, John wears a prison uniform.

With the help of Talmadge Baldwin's ID precinct book, Maddie and the player found John's fingerprints on the gas canister that was allegedly used to start the fire at the police station. Upon his arrest, John admitted that he had accidentally caused the fire when he tipped over the barrel he was using to burn some evidence after a secret group had threatened his family. When he was asked about who threatened him, he refused to talk, claiming that they would also kill him.

John was spoken to again by the player and Isaac about his magnifying glass being found in the possession of Rowdy Rick, who was recently murdered. John was happy to hear of Rick's death, saying he was constantly bullied by him. When asked what Rick wanted from him, John finally came clean saying it was Rick who forced him to burn that evidence or else he would harm his mother and sister. However, he did not know why, so Isaac and the player decided to search Rick's quarters again to find more proof linking Rick to the evidence burning. 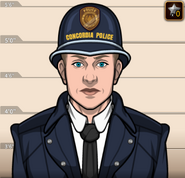 John, as he appeared in In the Line of Fire (Case #3 of Mysteries of the Past). 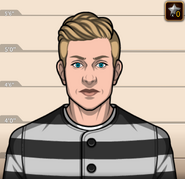 John, as he appeared in A Murder Carol (Case #4 of Mysteries of the Past) and wearing the prison uniform. 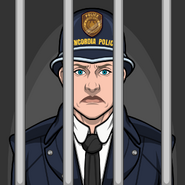 John, arrested for an unspecified amount of time for starting the fire in Concordia.
Add a photo to this gallery

Retrieved from "https://criminalcasegame.fandom.com/wiki/John_Koll?oldid=529148"
Community content is available under CC-BY-SA unless otherwise noted.