Joey Manzano was a suspect in the murder investigation of shop owner Lucy Campbell in Fashion Victim (Case #14 of Grimsborough).

Joey is a 41-year-old sales representative with black eyes and long black hair which is back-brushed. He wears a silver earring on his left ear and a golden chain on his neck. He usually wears a gray suit with a pink-colored shirt underneath it. It is known that Joey drinks Diet Cola, has diabetes and is right-handed.

Joey was seen with the victim in the Golden Thimble the night before the day of Lucy's death. Jones and the player found a notepad in which there was a torn page consisting of a phone number. After revealing the phone number, it was discovered that the number was Joey's. When asked about this, Joey told the team that Lucy was stuck up and he did not go home with her.

Joey was again called into the interrogation room when the team found his fingerprint on a receipt which matched the time the victim left the bar. When asked about this, he told the team that Lucy just wanted to make her girlfriend jealous. 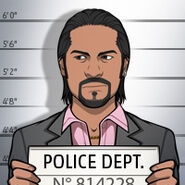 Retrieved from "https://criminalcasegame.fandom.com/wiki/Joey_Manzano?oldid=408471"
Community content is available under CC-BY-SA unless otherwise noted.