Joey Kim (Krn: 김조이) was a suspect in the murder investigation of stripper Stacy Lovely in Death by Martini (Case #53 of Pacific Bay).

Joey is a 42-year-old Korean-American con artist and chapel priest who works at Cupid's Chapel in Paradise City. He dresses like Elvis and has several cross necklaces and a gardenia flower on his jacket. It is known that Joey drinks champagne, sings karaoke and eats chocolate cake.

Joey was first interrogated after Frank and the player analyzed a cardboard advertisement of him found at the chapel. When informed that Stacy was married at the chapel, he could not recall her as he officiates dozens of marriages per day. Though he did not know who the victim married, he suggested the team investigate the Mennagio Hotel since that is where the couples typically go afterwards.

Frank and the player spoke with Joey again after they uncovered the victim's divorce scamming business. Stacy had been married to many men before Spencer Dickson, and she divorced them all in order to get their money. She would then split the profits with her divorce attorney, who so happened to be Joey Kim. When he met Stacy, he saw her potential and they then began earning profit from divorcing men, she got them to divorce her and he handled all the paperwork. When asked why he did not mention him knowing the victim in the first place, he said he did not want to become a suspect, and that he and Stacy ended up in an argument over the profits.

Joey Kim was proven to be innocent after Jeremy Bowman's incarceration, but was confronted later regarding a possible big heist in Paradise City. Thanks to a hunch by Sue-Ellen Lovely, the team managed to obtain more information about the heist. A tedious analysis from Hannah revealed the masterminds behind the heist require a team of five people and a lot of equipment. She also managed to find fingerprints belonging to Joey, leading the team to suspect he is part of the heist. Though he explained that he had nothing to do with the heist, and that he refused their offer to be involved. When asked who came forward with the offer, Joey replied by saying it was a local gun trader named Merv Waylon, who would be at an annual gun convention that would be opening soon. With this information, the team left to notify the station about Merv in order to obtain more information regarding the heist. 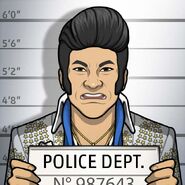 Retrieved from "https://criminalcasegame.fandom.com/wiki/Joey_Kim?oldid=413780"
Community content is available under CC-BY-SA unless otherwise noted.