Joey Beaty was a suspect in the murder investigation of cheesemaker Debby Gideon in A Crime Like No Udder (Case #44 of The Conspiracy).

Joey is a 27-year-old cattle farmer. He has short black hair littered with wheat and a mustache. He wears a sky blue denim buttoned-up shirt with an open collar, black suspenders, and a bolo tie with a blue jewel. Additionally, he is seen chewing on a piece of wheat. It is known that Joey drinks switchel and has a pickup truck.

Joey became a suspect after Jones and the player learned that his branding iron was used to brand the victim. When informed about it, he appeared shocked and told them that he had lost his iron. He was then asked if he knew the victim, which he denied.

Joey was spoken to again about his destruction of the victim's church hat. He revealed that he did not get along with the victim as she stressed out his cows. Despite his attempts to keep her away, she kept pestering him, which he claimed was in no one's best interest.

Joey was found to be innocent after the team incarcerated Tallulah Shropshire for Debby's murder. He was later visited by Rita and the player, who were looking to find something "typically American" for Martine's birthday. He suggested that they took Martine to the rodeo, prompting the two to find rodeo tickets. 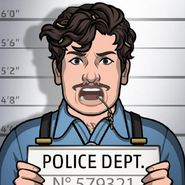 Retrieved from "https://criminalcasegame.fandom.com/wiki/Joey_Beaty?oldid=446957"
Community content is available under CC-BY-SA unless otherwise noted.