Joe Stern was a suspect in the murder investigation of mortgage broker Ned Dillard in Corpse in a Garden (Case #2 of Grimsborough) and the killer of Vipers member Chad Whickman in Burned to the Bone (Case #9 of Grimsborough).

Joe is a 42-year-old manager of a mini-market. He has messy brown hair and black eyes. He commonly wears a blue shirt which has a badge on the left side that reads, "MANAGER, JOE STERN".

In his first appearance, Joe is seen wearing a bandage and has a missing tooth.

In his second appearance, Joe lacks the bandage and has dandruff on his shoulders. It is known that he wears sport shoes and smokes.

Joe was interrogated after Jones and the player found a flammable liquid bottle which was presumably bought by the killer from his market. When and the player asked about this, Joe said he did not knew anything about the killer, which led them into searching his shop.

Joe was interrogated again after the player and Jones found out Ned had taken his house unfairly. Joe said he was innocent and the they searched the store again. Joe was found innocent after the player found enough evidence to arrest Dennis Brown for the murder.

In the Additional Investigation, Joe informed the team that a Viper had come into his market, and thought there was something suspicious. The team found a bag of powder in a box of cookies within the shelves. The unknown powder was later revealed to be cocaine, so the team warned Joe about the drug.

The team investigated Joe's market again and found a job application the victim had sent to him, and CCTV footage which finally let the team arrest him.

Joe confessed that he killed Chad because the Vipers would always come to his mini-market and destroy all the items. As a result, he became furious when Chad asked for a job in his mini-market (since Chad was a member of the Vipers) and, therefore, doused him in gasoline before setting him on fire with his cigarette.

Joe also stated that his only regret was that he did not get to kill more members of the Vipers, so for his sick crime and also for his unrepentant nature, Judge Hall hereby sentenced him to 20 years to life in jail. 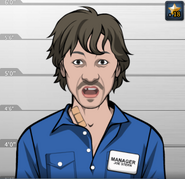 Joe, as he appeared in Corpse in a Garden (Case #2 of Grimsborough). 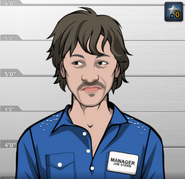 Joe, as he appeared in Burned to the Bone (Case #9 of Grimsborough). 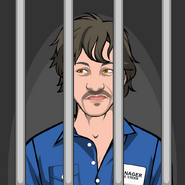 Joe, sentenced to a minimum of 20 years in jail for the murder of Chad Whickman. 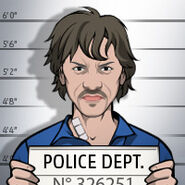 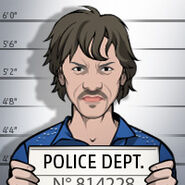 Retrieved from "https://criminalcasegame.fandom.com/wiki/Joe_Stern?oldid=528597"
Community content is available under CC-BY-SA unless otherwise noted.