Joe Littlehat was the killer of street swindler Sammy Duncan in Death by Moonshine (Case #9 of Pacific Bay).

Joe is a 37-year-old poacher who hunts alligators for sport, and according to Hannah, does it illegally given that Joe does not hold an alligator license. Joe wears a stained beige hunter hat and sports brown hair, brown eyes, tanned skin with blemishes on his face and brown stubble. He also wears an earring on his left ear, and is often seen carrying a hunting rifle. Joe wears a dark-brown hunting vest on top of his stained blue buttoned shirt and wears a tooth necklace on his neck. He sustains a skin rash on the right side of his neck. It is known that Joe uses eggs, drinks moonshine and plays dominoes.

Joe is a Bayou Bleu poacher who hunts for sport, but was involved with a clandestine moonshine operation at the time of the case.

Joe found himself in the red when Hannah analyzed the alligator trap found at the victim's boat belonging to Joe Littlehat, prompting the team to talk to him since Hannah also confirmed that Joe did not have a license to hunt alligators.

Frank warned Joe not to pose a danger to his pet turtle "Duke" at the start of the conversation, but attempted to find out the truth by asking Joe what the alligator trap was doing at Sammy's boat. Joe couldn't remember or recall an event since he sobered from his last glass of moonshine—an illicit whiskey Sammy made as an alternative to The Mad Cow bar. Joe might had been broke, but knew his ingredients very well and went far by telling Frank not to have his turtle cross a wrong path as Joe had a lot of traps set throughout the swamps. Frank was irate when he heard Joe's warning to his turtle but the player told Frank to concentrate on the murder investigation instead.

Joe was approached by the team a second time after both him and Padre Rafael were caught pointing guns at each other and both were instructed by Frank to put their guns down and permit the player a second look at Sammy's boat followed by a chit-chat with both, in which Joe accused Padre of cheating in a game of dominoes.

Right after the domino piece was forensically dusted, the team opted to talk to Joe a second time about the domino piece and claimed that Rafael cheated and attempted to create a negative experience for him. Frank made it clear that a domino player killed Sammy but Joe countered that he had more important matters in mind than dominoes—the moonshine business in which Joe claimed that his moonshine was a hit in the district. Joe told the team he supplied the ingredients for the acclaimed moonshine and even told Frank to try the moonshine, although Frank took drinking differently—in the city and not in Bayou Bleu.

It was later revealed that Joe was responsible for the murder of Sammy Duncan. Joe killed Sammy because he couldn't stand the fact that Sammy took more recognition and profits than him, so Joe chopped Sammy's head off with a axe and placed his head in Betty-Lou's bar because Betty-Lou spat on his beer. Judge Dante sentenced Joe to 25 years in prison. 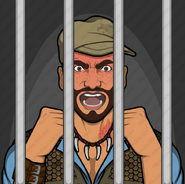 Joe, sentenced to 25 years in jail for beheading Sammy Duncan. 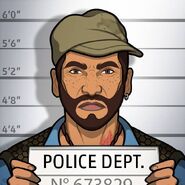 Retrieved from "https://criminalcasegame.fandom.com/wiki/Joe_Littlehat?oldid=408478"
Community content is available under CC-BY-SA unless otherwise noted.