Joan Segan was a suspect in the murder investigation of her brother, S.A.R.A. engineer Thomas Segan, in Houston, We Have a Problem (Case #8 of Travel in Time).

Joan is a 31-year-old diner waitress and the sister of the victim. She has short ginger hair and green eyes. Joan is seen wearing a light orange waitress uniform with white neck and white buttons, along with a matching diner waitress headpiece and a white apron, which has a front pocket on its left lapel. Additionally, she sports red lipstick, a light gray nametag with her name in dark gray letters on her left lapel, along with a pair of orange circular earrings. Furthermore, she is seen holding a red pen on her right hand and a notepad on her left hand. It is known that Joan drinks Moonbeam.

Joan became a suspect after Zara and the player identified her as the victim's sister. Shocked that Segan had been killed, she told the team that he was a wonderful brother. She revealed that he went to the diner she worked at every day, although he was a bit of a loner.

Joan was spoken to again about her brother refusing to give her money. Drunk upon her second interrogation, she told the team she was struggling to pay her rent. Since Segan had earned a lot of money, she asked him if he could put some money aside for her, but he refused.

Joan was found to be innocent after the team incarcerated Mark Hamilton for Segan's murder. 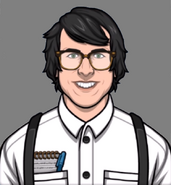 Retrieved from "https://criminalcasegame.fandom.com/wiki/Joan_Segan?oldid=488285"
Community content is available under CC-BY-SA unless otherwise noted.