Jīn Bǐngxǔ (Chn: 金秉栩) was the victim in For Whom the Bell Tolls (Case #28 of Travel in Time).

Bingxu was a landowner with dark brown eyes, black hair tied back with a brown wooden clip, a mustache, a soulpatch and a goatee. At the time of his death, he wore a beige kimono with beige and gray lining over white wraps and under a dark brown cloak and light brown slippers. It is known that Bingxu was allergic to dried jujubes.

Bingxu's body was found bashed over the head with a bell at the opera house; the bell was immediately filed by Zara and the player as the murder weapon. Janis revealed that the bell came from a bianzhong. She also found traces of dried jujube on Bingxu's wrists; after determining by the purple welts on his wrists that Bingxu was allergic to dried jujube, Janis concluded that the killer ate dried jujubes.

At the victim's riverboat, Zara and the player found bloodstained remnants of the victim's clothing. Theo determined that the beads came from a hand-held abacus, concluding that the killer used an abacus.

Bingxu had kidnapped Princess Torgoljin of the Mongol Empire on behalf of first minister Shi Miyuan. When Bingxu realized that his hostage was a princess, he demanded that Miyuan doubled his payment. Emperor Lizong thought that Bingxu had grown increasingly irreverent in his presence; opera singer Lian Wei was angry that Bingxu had attempted to use his fortune to control the opera and end her career; explorer Santiago Sanchez discovered that Bingxu had failed his civil exam, but when he confronted Bingxu about it, the landowner claimed that no one would believe him because he was a foreigner.

The killer turned out to be Miyuan.

Miyuan told the team that Bingxu was planning to go to Ogedei Khan himself, pretending he had rescued Princess Torgoljin, in order to gain a hefty reward. To stop Bingxu from jeopardizing the operation, Miyuan waited in the opera before bashing his head in with a bianzhong bell. Emperor Lizong had the guards take Miyuan away to await his full punishment, but refused to hand Torgoljin back. 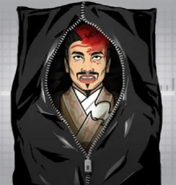 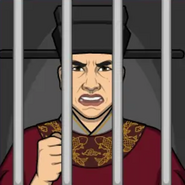 Shi Miyuan, Bingxu's killer.
Add a photo to this gallery

Retrieved from "https://criminalcasegame.fandom.com/wiki/Jin_Bingxu?oldid=509806"
Community content is available under CC-BY-SA unless otherwise noted.