Jezebel Lopez was a suspect in the murder investigations of stripper Stacy Lovely in Death by Martini (Case #53 of Pacific Bay) and ex-con Louis De Rico in No Honor Among Thieves (Case #55 of Pacific Bay).

Jezebel is a 35-year-old stripper who worked alongside Stacy Lovely. She has black hair with a gardenia flower in it, and wears purple lingerie.

In her first appearance, it is known that Jezebel sings karaoke.

In her second appearance, she has an orange dye stain on her right shoulder. It is discovered that she has a cough and knows lock picking.

Jezebel was first interrogated after the player and Frank found her robe on the crime scene. She identified the victim as Stacy Lovely, and was sad to hear of her death. She said that girls with Stacy's looks deserve to be stars in Ivywood, not become strippers. Jezebel told the victim to leave the stripper business before she got stuck like her, but she needed money and constantly took men back to the Mennagio hotel.

Frank and the player spoke with Jezebel again after finding a message she wrote to Stacy saying to "enjoy it while it lasts". She wrote the message because she felt that the victim was getting too caught up with being in the spotlight. Despite her teaching the victim the ropes, the victim became an attention hog even stealing some of Jezebel's clients. She believed that strippers do not steal others' clients and said that the moment in the spotlight will not last forever.

Even though she was proven to be innocent after the team incarcerated Jeremy Bowman, they had to settle a dispute between her and Spencer Dickson. Spencer accused Jezebel of stealing his watch, and analysis from Hannah revealed that Spencer was right. When confronted by Roxie and the player, she said she stole it because she took it as payment. She also said that Spencer refused to pay her for her services, leading the team to investigate the hotel room that Spencer was staying in to find proof of Jezebel's claims.

Jezebel was interrogated on another case after the team found her bra in the heist team's hideout. She said that she was to be part of the heist crew in order to get information and distract the security. She also said she had nothing to do with Louis's death, she just did her part and got out while she had the chance. Frank was not sure if she was Louis's killer, but she was put under arrest anyway for her involvement in the heist.

She was interrogated again after the team found a message she sent to the victim, suggesting that she had a crush on him. Jezebel did confirm that she fell in love with the victim, but the feeling was not reciprocated. She thought the two of them would run away together after the heist was over, but she was aware that money mattered more to Louis and that she was just being used.

Jezebel was found to be innocent after the team found enough evidence to incriminate Danny Moto for Louis's murder. Jezebel was spoken to again by the player and Chief Marquez to see if there was anything they missed in their initial investigation. Andrea offered to lower her prison sentence if she helped tie up any loose ends, and Jezebel agreed without second thought. She said that Louis was constantly talking to someone behind everyone's back, and drastically changing his plans afterwards. When Andrea questioned if there was a sixth person involved, Jezebel suggested the team go investigate the headquarters for more information. The investigation led to the team finding a mysterious message with the heist team, minus Louis. According to Russell, the message was not written by Louis, but by someone who had possibly been controlling him from behind the scenes. Jezebel was spoken to again regarding the apparent mastermind, she was not surprised as Louis seemed like he was looking for something specific. 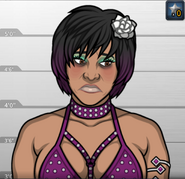 Jezebel, as she appeared in Death by Martini (Case #53 of Pacific Bay). 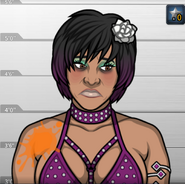 Jezebel, as she appeared in No Honor Among Thieves (Case #55 of Pacific Bay). 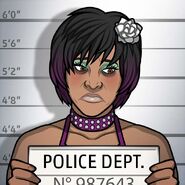 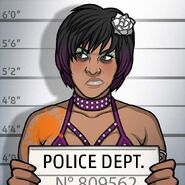 Retrieved from "https://criminalcasegame.fandom.com/wiki/Jezebel_Lopez?oldid=430188"
Community content is available under CC-BY-SA unless otherwise noted.