Ambassador Jessica Stern was a suspect in the murder investigations of military attaché Adam Hassan in Murder by Proxy (Case #7 of World Edition) and weapons dealer Seamus Cummings in The Parting Shot (Case #11 of World Edition).

Jessica is the 45-year-old US ambassador stationed in Morocco. She has long blonde hair and glasses, and dons a maroon suit over a white shirt. A card is visible in the suit's pocket. It can also be noted that she wears a gold necklace and an earring on her right ear.

In her first appearance, she has a blue scarf around her neck and has silver earrings. It is known that Jessica drinks mint tea.

In her second appearance, she ditches the scarf and dons gold earrings. It is discovered that she drinks coffee and skis.

Jessica was first interrogated after the player and Jack found the victim's phone, which revealed that she tried to call the victim ten times. She was surprised to hear of Adam's death, and knew something was up when he did not return from the nearby souk. Jack pointed out how much of coincidence that Adam was killed the same way as Chief Ripley, Jessica thought that they were implying it was the embassy's fault. Before Jack could explain, Jessica said that both deaths were the fault of The Bureau's and sent the player and Jack on their way.

Jessica had to be spoken to again after she informed the Bureau that they must leave by the end of the day. She said the embassy decided to vacate the country because Adam's death caused a political scandal, showing a weakness in the embassy's security. Jack thought that this was a way for the Bureau to not solve Adam's murder, but Jessica stated that she did not care for what happened to Adam as she found out he wanted to steal her job. She informed the Bureau that they have until the end of the day to complete the investigation, or they will be escorted out of the country, by force if necessary.

In the end, Jessica was found to be innocent after the team arrested Christy Mathis for Adam's murder. However, she was spoken to again by the player and Marina regarding a photo of Adam which said "Watch your back!". Jessica apologized to the player for her behavior during the investigation and offered money to say thanks, but Marina refused, saying they do not accept monetary compensation. When asked about the photo, Jessica said it was how she found out about Adam wanting to steal her job. She hired Jonah Karam in order to keep tabs on Adam, to make sure he would not try to steal her job.

Jessica was first interrogated regarding her sudden appearance in Dubai. However, when Jack and the player arrived at her hotel room, they found that her son Andrew Stern was there as well. When Jessica did appear, she said she did not have time to talk right now and had to be at the ski slopes. Jack became suspicious of her and how she blew them off.

Jessica had to be interrogated again about newspaper headlining a shooting in Morocco, with a message saying that the person she was looking for was Seamus Cummings. She confirmed their suspicions, saying that with Seamus selling weapons to rebel factions, they decided to target foreign interests including schools. She was especially frightened at the recent shooting that had occurred at her son's school. Jessica came to Dubai to negotiate a deal with the victim, but he said he was not interested.

Jessica was found to be innocent after the team incarcerated Fiona Cummings for Seamus' murder. However, The Bureau was informed that Jessica's son Andrew was kidnapped. Jessica explained that they were at the underwater bar when her son went to the bathroom, but never came back; and when she went to check on him, he was gone. Luckily he had his teddy bear with him, and Jessica said she placed a tracker in the bear which can be tracked with her phone. Unfortunately she lost it, so the player, Jack, and Carmen went to look for it. It was eventually found and returned to her, and it revealed that Andrew was in the gulf moving towards Iraq. 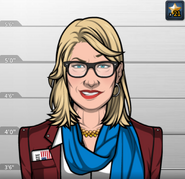 Jessica, as she appeared in Murder by Proxy (Case #7 of World Edition). 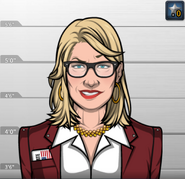 Jessica, as she appeared in The Parting Shot (Case #11 of World Edition). 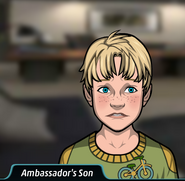 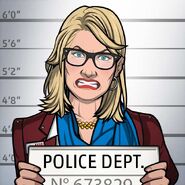 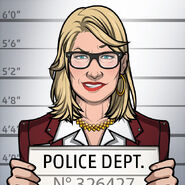 Retrieved from "https://criminalcasegame.fandom.com/wiki/Jessica_Stern?oldid=408486"
Community content is available under CC-BY-SA unless otherwise noted.