Jess Prakti was a suspect in the murder investigation of scientist Bruce Green in The Seeds of Death (Case #41 of Pacific Bay) and the killer of entrepreneur David Rosenberg in Into the Wastes (Case #57 of Pacific Bay).

Jess is a 37-year-old now-former scientist. She has short black hair and brown eyes. She is seen wearing a lab coat over a black shirt with white polka dots. She also wears a necklace and has plastic goggles on her head.

In her first appearance, she has an oil stain on her lab coat. It is known that Jess has asthma and eats sunflower seeds.

In her second appearance, she has a chemical stain on her lab coat and she wears a scarf on her neck. It is discovered that she has radiation sickness, is an employee for Meteor Systems and has a generator.

Jess was first approached by Amy and the player when Hannah identified her as the scientist who worked with Bruce Green on the corn project. Jess told the team that she and the victim worked together for five years. She then explained that Bruce had died just when they had successfully grew corn in the desert ground inside the incubator, which requires no water. When asked if anyone could kill Bruce because of the discovery, Jess did not think of anybody. She went on to say that the accomplishment of growing corn in the desert would help a lot of people and that the desert would no longer be a wasteland while at the same time not expand and destroy the fertile lands around it.

Jess was approached again when Hannah discovered that Bruce hogged all the credit for their discovery and intended to sell it in an auction. Jess admitted that Bruce only cared for the money and did not even tell her about the auction. Jess had suffered her first asthma attack in years because of the victim's actions of deceit. She admitted that she was happy that Bruce was dead so that the auction would not go through, but she also explained that she had worked for years on the project by spending many nights bent over her microscope and eating sunflower seeds in order to feed people in the desert.

Jess was eventually found innocent of murder when Jake Drill was incriminated as Bruce's murderer.

Jess found herself in trouble again after the player and Amy found her hazmat helmet on a nuclear testing site. She said that she was in The Wastes because she was working on a new science experiment. When asked about the victim, she said she did not know him as she claims to be too busy for a social life. When she was asked about the escaped fugitives, she said that they would be dead before they were caught, and informed the player and Amy to leave The Wastes before it is too late.

She was spoken to again after the team found her fingerprints on a container of radioactive material, which David was killed by. She said that she and the victim were working together on a science project for Meteor Systems, but she hardly knew him due to him being constantly absent. While she could not reveal what the project was other than it would be ground-breaking, she was not surprised to hear of David's death, and informed the player that they watch their step if they do not want to end up with the same fate.

Jess strictly believed that any slayings she committed were accidents, but Amy was not thrilled about the excuses Jess tried to throw to sweet-talk the junior officer out of incarceration. Jess had to bow before the player's investigative skills after she told the team that she had to kill David before he went ahead to slaughter the team responsible for the revival of Albert Tesla's mad experiments.

Jess assisted Dr. Neuman on a machine to read minds, but when the mind reading report of David's mind populated, it terrified Jess as he intended to stop the experiments by slaughtering the involved scientists one by one until the experiments came to a halt. Jess felt that David was on a death wish to sunset Tesla's mad experiments, something she could not allow. Jess spotted David at the district's entrance, and then knocked him out cold with a baseball bat, and threw him at the puddle of liquid nuclear waste, radiating the entrepreneur to death. Jess was aghast when Amy and the player would investigate murders in the Wastes given that no one was allowed on that district. All Amy wanted from Jess was the whereabouts of Karen for a more lenient sentence, but Jess refused to cooperate, so the player shipped Jess to face Judge Dante.

Judge Dante felt that Jess should have fired David instead of pushing David to a pool of liquid nuclear waste, but Jess countered that David's intention of manslaughtering to stop a mad project would deny Meteor Systems a chance to save thousands of lives in Pacific Bay. The verdict was a 30-year jail sentence for the dirty scientist, but as the bailiff shipped Jess to prison, she made it clear that the progress of science was not something to be ignored. 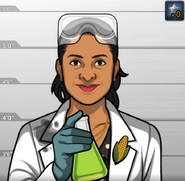 Jess, as she appeared in The Seeds of Death (Case #41 of Pacific Bay). 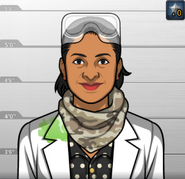 Jess, as she appeared in Into the Wastes (Case #57 of Pacific Bay). 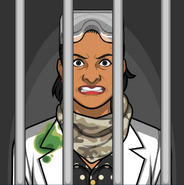 Jess, sentenced to 30 years in jail for the murder of David Rosenberg. 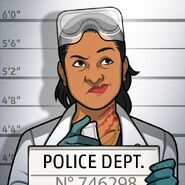 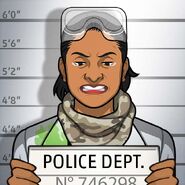 Retrieved from "https://criminalcasegame.fandom.com/wiki/Jess_Prakti?oldid=517953"
Community content is available under CC-BY-SA unless otherwise noted.