Jerry Miller was a suspect in the murder investigation of historian Reggie Liotta in Writer's Blocked (Case #21 of The Conspiracy).

Jerry is a 37-year-old watchman of the Grimsborough Museum. He has dark brown hair and black eyes. He is seen wearing a dark grey collared shirt and a black tie under a black jacket with pockets and a blue and white logo on each arm sleeve. He also has a speaker radio in his right breast pocket and is seen holding a flashlight. It is known that Jerry uses hand sanitizer, knows Xerdan language and is a member of the Historical Society.

Jerry became a suspect after Gloria and the player learned that he was the museum's security guard. After being told about the murder, he said that he had often seen the victim in the museum for research purposes.

Jerry was spoken to again about his affair with the victim. He revealed that the victim had wanted exclusive access to the museum's exhibits, which he had allowed in exchange for sexual favors. However, he eventually refused to allow Reggie into the exhibits, which was met with Reggie's rebuttal.

Jerry was found to be innocent after the team incarcerated Jebediah Cobb for Reggie's murder. 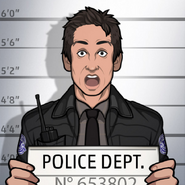 Retrieved from "https://criminalcasegame.fandom.com/wiki/Jerry_Miller?oldid=408508"
Community content is available under CC-BY-SA unless otherwise noted.