Jerry was the owner of a gentleman's club, the Livingstone Club. At the time of his death, Jerry wore a white shirt and a black shirt with a white tie underneath it. He had brown hair and also brown eyes.

Jerry was found dead in Mayor Howard Johnson's campaign garden party, coughing up blood shortly after eating the cake. Jones and the player sent the body to Nathan, who found razor blades and associated cuts inside the victim, leading him to conclude that Jerry did not chew his food. Nathan had also found fibers of a tennis ball in the cuts in Jerry's throat, meaning that the killer played tennis. Later, Nathan told the team that Jerry had also been injected with a "truth serum" prior to his death.

When the team seized an empty box of razor blades in a trash bag at the bridge near the crime scene, they sent the fibers on the bag to Grace for analysis. After she confirmed that the razor blades were what was used to kill Jerry, Grace said that the fibers came from a bow tie, meaning that the killer wore a bow tie.

Many years prior, Jerry had wooed a hotel maid with a promise of a better life. When she told him that he had gotten her pregnant, Jerry angrily left her, making their daughter, Akiko Tanaka, resent him. Jerry was friends with Mayor Johnson, supporting him on his election campaign but apparently dropping his support on his re-election campaign over a minor disagreement.

Meanwhile, his Livingstone Club was a place where members could trade secrets and invaluable information. One of its members was Mitchell Westville. Socialite Adam Bentley also wanted to join the club, making a mask of Jerry and forging his penmanship to get to know him better, so Adam could make Jerry like him more. Mayor Johnson's mother, Serena Johnson, had also been paying Jerry to learn the secrets traded in the club as she was kept out of it due to her gender. This was how she learned of a secret that concerned her son and so she threatened Jerry to keep it secret.

The killer turned out to be Mitchell.

After Jones disguised himself as Jerry and approached Mitchell, Mitchell admitted that Jerry had gotten him drunk enough in the club to admit that his family was broke. Jerry had also recorded the entire confession. Not wanting his family's reputation to be destroyed, Mitchell injected him with truth serum to find the location of the safe and destroy the recording inside. He then rigged the cake with razor blades to keep Jerry silent forever. Judge Hall sentenced him to life in prison. 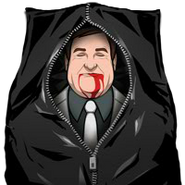 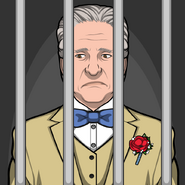 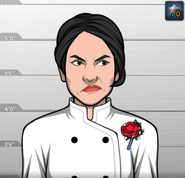 Akiko Tanaka, Jerry's daughter.
Add a photo to this gallery

Retrieved from "https://criminalcasegame.fandom.com/wiki/Jerry_Bigwall?oldid=451112"
Community content is available under CC-BY-SA unless otherwise noted.