Jenny Quaid was a suspect in the murder investigation of history novelist Rosie Gatewood in The Poisoned Truth (Case #54 of Grimsborough).

Jenny is a 32-year-old ghostwriter with green eyes and shoulder-length brown hair. She wears a red collared shirt underneath a gray patterned vest. She also sports a pair of purple lensed glasses tucked in her hair and holds a stack of papers with the word "FIRST DRAFT" written on the first page, along with a quill pen on her left hand. It is known that Jenny practices fencing.

During the early stretch of the team's investigation, Jones and the player spotted a cryptex in the paint and, since the Pilgrim museum had every item in the painting, recovered it. After opening it, they found a USB key with Rosie's name on it. They sent it to Alex for analysis. In the lab, Alex said that the USB key contained a copy of Rosie's last will and testament, in which she said all her fortune would go to Jenny, Rosie's ghostwriter.

When they went to talk to her, Jenny said that she was not sad about Rosie's death because Jenny wrote her books and Rosie got the credits without giving Jenny any reward. When the team went back to the police station, Jenny visited them and gave them a faded map of the Pilgrim museum. After applying some forensic powder on it, they could discover that there was a secret lair under it, which belonged to Geert De Haan, Kirk De Haan's ancestor. The team then decided to investigate the lair.

After doing so, the team decided to take another look at the painting and spotted a torn pattern. After recovering and restoring it, they found a Crimson Order symbol. They thought that Rosie died because she was going to write a secret about the Crimson Order in her book and, since Jenny was the one writing Rosie's books, they decided to have another talk with her.

Jenny told them that she knew about the Crimson Order's involvement in the city's darkest secrets removal. She further said that Rosie was going to write about the Crimson Order in her book, no matter the danger. She also said that Rosie could have learned fencing like her to defend herself, but she was too lazy. Jenny then concluded that she did not warn Rosie about the danger as Rosie always ordered her to keep quiet.

Although Ashton Cooper was found guilty of grand manslaughter, the team wanted to know more about the Crimson Order, so they went to question him. After he refused to help (he only mentioned that the "White Acres" painting was ordered by the Crimson Order as a gift for one member), the team decided to investigate the canvas of the painting, where they found the painting was for a certain William Kingsley (an ancestor of Samuel King). Since Ashton refused to help and the team were really curious about that, they decided to question Jenny because she investigated a lot about Grimsborough's history for Rosie's books.

During the conversation, Jenny said that she was able to help because she knew something about the Kingsley family. She continued that some of Kingsley's items were in the museum, so the team looked around the scene. There, they found a clothes trunk with an old letter inside it. The letter said that a certain prisoner named John Bill had been falsely accused of murder and was going to be released, with the sign of the Pilgrim village's Governor's assistant. After analyzing the wax seal, Alex managed to discover that the letter was written by William Kingsley. William Kingsley had vouched for John Bill to be free though he was accused in the police files of triple murder. Being curious about why had William released such a killer, they once again went to Jenny to ask her about it.

Jenny told the team she could manage to find out that the Kingsley family had released every murderer belonging to the Crimson Order without facing a trial and then, with the help of the Kingsley family, every story had vanished. Jenny concluded that she was not going to research the topic any more to prevent attracting the Crimson Order's attention. 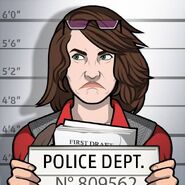 Retrieved from "https://criminalcasegame.fandom.com/wiki/Jenny_Quaid?oldid=515114"
Community content is available under CC-BY-SA unless otherwise noted.