Jenny Honeycomb was the killer of her girlfriend, au pair Irina Nemovska, in An Elementary Murder (Case #40 of Grimsborough).

Jenny is a 35-year-old brown-haired teacher. Jenny dons a white blouse under a pink sweater and an apple-shaped "Best Teacher" badge on the right side of her sweater. Aside that, she also wears a gold cross necklace. It is known that Jenny owns a teddy bear, has asthma and eats Sweet Hearts.

Jenny was called into the investigation when Jones and the player found a passport belonging to Irina Nemovska. Jenny told the team that Irina worked as an au pair for the Mills family, a vulgar Nouveau Riche that moved to Grimsborough one year prior to this incident, but the team wanted to know if Jenny had contact with the victim. All Jenny delivered was basic information and sour judgments on Irina in the first conversation.

Jenny came clean during the second discussion after the team found a gift box with a gift card purchased by her with a credit card. Jenny told the team that Irina came to her classroom with a bag of Sweet Hearts candy and in return she told Irina to join her for coffee. During the coffee meet, Jenny kissed Irina but as Jenny tried to come clean, her asthma got worse from her emotions. Jenny told the team she got into an LGBT relationship (although she did not make the conversation obvious) and wanted the team to keep quiet as she could not risk losing her job as Jenny was from a social circle which forbade people from revealing any LGBT relationship in any form or fashion.

Whether Jenny's LGBT relationship with Irina was exposed or not, all evidence exposed Jenny as the transgressor. After being sent to court, Jenny admitted that she was in a closeted LGBT relationship with Irina. Irina wanted to make their relationship public but Jenny was scared of the repercussions this would have on her. On the day of Irina's death, Jenny asked Irina to come over in her classroom during recess, she had brought a gun hidden in a teddy bear with her to threaten Irina so that she can end the discreet LGBT relationship since she believed Irina betrayed her feelings for Jenny in front of her children and thought by threatening her, Irina would leave Grimsborough. Jenny was not planning to shoot at her but near enough so that she would be scared, but the gun was broken. Irina, thinking Jenny really wanted to kill her, then jumped at her; Jenny tried to fend her off with her inhaler but it only made Irina fight harder. As Irina pinned Jenny to a wall, Jenny grabbed a pair of child's scissors from one of the desks and stabbed the victim to death.

Judge Hall sentenced Jenny to life in jail in spite of her admitting guilt of first-degree murder in front of both the police and court. 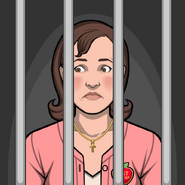 Jenny, sentenced to life in jail for the murder of Irina Nemovska. 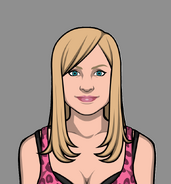 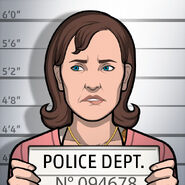 Retrieved from "https://criminalcasegame.fandom.com/wiki/Jenny_Honeycomb?oldid=408427"
Community content is available under CC-BY-SA unless otherwise noted.