Jenny was a 14-year-old teen soap sensation and a child star who played a significant amount of princess roles in her short acting career. Jenny had brown eyes and long brown hair. At the time of her death, she was seen wearing a yellow princess dress accompanied by a silver necklace around her neck, a golden tiara on her head, and a pair of round earrings.

Frank and the player found Jenny embedded with glass shards on the set of The Glass Princess. They sent her body to Roxie, who said that the killer had pushed Jenny into the mirror hard enough to shatter it. They then took a piece of glass debris and stabbed it in her neck, dealing the fatal blow. Roxie found traces of anti-aging cream on the piece of glass, meaning that the killer used anti-aging cream.

Jenny was to star as the Glass Princess in the movie rendition of Gaston Dumas's book. Gaston was dissatisfied at Jenny urging the production company to change the plot of the book from the story of a war princess to one more watered-down, fairytale version. Meanwhile, producer Horace Foster threatened to fire Jenny for her tardiness. However, he was also pressuring Jenny to star in a possible sequel to the movie despite her adamant refusal. Jenny could not deal with the pressure of being a child star, often consulting Dr Trevor Neuman. Jenny's mother, Miranda, wanted her to carry her legacy as a princess actress, which she did successfully, even surpassing Miranda's fame. Meanwhile, Susan Blair looked forward to playing the witch against Jenny's princess, although Jenny actually thought Susan was mean because she played the villain.

The killer turned out to be Miranda.

After denying involvement, Miranda admitted to killing her own daughter due to her jealousy that her daughter was becoming more famous than her. When she went to the studio to see Jenny and saw her reflection on the mirror with Jenny, Miranda became enraged, slamming her daughter against the mirror and stabbing her in the throat. Judge Dante sentenced her to 30 years in jail for the brutal murder of her own daughter. 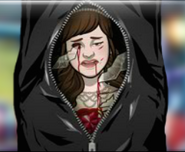 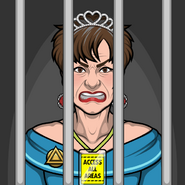 Miranda Galguera, Jenny's mother and killer.
Add a photo to this gallery

Retrieved from "https://criminalcasegame.fandom.com/wiki/Jenny_Galguera?oldid=535696"
Community content is available under CC-BY-SA unless otherwise noted.