Jenna is a 34-year-old electrician with short blonde wavy hair, brown eyes and lipstick. She is seen wearing a pair of glasses as well as piercings on her ear and underneath her lips. She wears a red checkered shirt with a blue overalls over them. On the overalls, there is a pocket with a DreamLife logo on it. Furthermore, there are a wrench, a plug, as well as two screwdrivers inside Jenna's overalls' pocket.

In her first appearance, Jenna works for DreamLife and it is known that Jenna drinks iced tea.

In her second appearance, she works for the Grimsborough Power Plant. Her overalls is now seen without the DreamLife logo. Additionally, she wears a transmission tower badge on her right lapel. It is discovered that she is right-handed, eats energy bars, plays the electric guitar and has a criminal record.

Jenna became a suspect after Gloria and the player found her toolbelt in the victim's greenhouse and learned that she was there recently. The team then talked to Jenna, who told the team that Wendy was a nice woman. Later, after finding out that she was an electrician, Gloria asked Jenna if she had been repairing anything in Lab 88-B, where Wendy was frozen and the DreamLife experimentation took place. Answering about this, Jenna said that she had changed some light bulbs there. However, she then told the team that she did not know anything about the experimentation as well as what the scientists had been up to because they never called her when they were working.

Gloria and the player then spoke to Jenna again after they (per Gabriel) found out that she had sent a bra to the victim as a gift. After revealing that she was pretty interested in the victim, Jenna told the team that Wendy did not feel the same way. At first, she thought that it was just because Wendy was dating Barb Bellamy. However, after Barb was killed, Wendy still kept rejecting Jenna, making her feel uncomfortable. In the end of the conversation, Gloria hoped that Jenna did not do anything more aggressive than flirting.

Jenna was found to be innocent after the team found out that Rosie Summers was Wendy's killer.

Jenna became a suspect again after Gloria and the player learned that she worked at the power plant. When asked about the blackout's cause, she told the team that the cause was unknown and that she was working overtime to fix it. She was then told about the murder, prompting her to inform the team that the plant had recently been inspected. This led the team to interrogate Felix Murray.

Jenna was spoken to again about her history of causing blackouts. She confessed that she had once caused a blackout using an EMP machine that she had created. When asked if she had used an EMP to cause the blackout, she denied culpability.

Jenna was found to be innocent again after the team incarcerated Felix Murray for Ryan's murder. 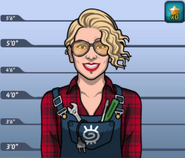 Jenna, as she appeared in In Cold Blood (Case #35 of The Conspiracy). 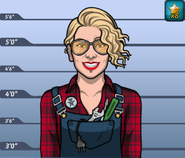 Jenna, as she appeared in Lights Out (Case #50 of The Conspiracy). 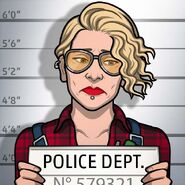 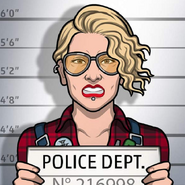 Retrieved from "https://criminalcasegame.fandom.com/wiki/Jenna_McFry?oldid=473904"
Community content is available under CC-BY-SA unless otherwise noted.