Jemima is a 52-year-old nurse of a larger build. She has short, curly blonde hair which she wears under a nurse's bandana. She also dons a nurse's outfit, consisting of a white vest with grey details over a dark brown dress with a matching dark brown silk ribbon. She also wears grey circular earrings and has a white band on her left arm bearing a nurse's cross.

In her first appearance, it is known that Jemima knows how to fight and uses hair powder.

In her second appearance, she sports a bloody bandage on her right arm. It is discovered that she has fleas.

Jemima became a suspect after the player and Maddie found a poster saying she was helping out the victim. She was shocked to hear of the murder, wondering who would kill such a wonderful man. She explained the victim was a selfless man, tossing out his aristocratic status to help the poor folks of Sinner's End. The victim never cared for wealth or prestige, he even spent his own money to help people, all kinds of people others would not even give a second glance.

Jemima was spoken to again about a postcard that read, "Trying in vain to stop Wilson. Can you help?" She explained it infuriated her that the doctor was helping out the locals of such a lawless area, and she even tried to make him understand but to no avail. Jemima firmly believed that those people did not deserve help, and they deserve punishment more than anything. As for the person she was trying to get help from, that would be the victim's father, Frederick Wilson. So Maddie and the player decided to speak with Frederick again about this new information.

Jemima was found to be innocent after the team incarcerated Kev O'Connell for Barnaby's murder.

Jemima became a suspect again after the player and Maddie found the admission form she made for the victim. She said they took care of her, but she left before they could finish her treatment. But when informed of her murder, she simply said she did not know or care where she went after she left. When Maddie called her out on her uncaring behavior, Jemima snapped saying she had a lot of people to look after thanks to the gang wars, and could not keep track of every single patients' whereabouts.

Jemima was spoken to again about a note to the victim telling her to stay away from the medicine. She explained the victim had faked her illness, and tried to steal morphine from the hospital. She tried extra locks, but the victim insisted on busting through them, so she moved the medicine to another location and left the note for the victim. Later she was caught trying to steal it again, so they threw her out of the hospital. And whether or not she stole anything was yet to be determined, but Jemima was still running an inventory.

Jemima was found innocent again after the team incarcerated Timmy Tanner for Bridget's murder. But she was later spoken to by the player and Judge Lawson, in hopes of making the hospital a safe place from the gang wars for children. But she refused to help, saying the place was filled as it is and they only have room for the ill or gravely injured people. No matter what Justin said, Jemima refused to help, even saying she lost all memory of her childhood when she lost her favorite doll on the Crimson Bridge, so Justin and the player decided to search the bridge and find the doll to warm Jemima's heart.

After finding the doll and repairing it, they sent the doll to Viola to ensure it belonged to Jemima. Viola confirmed it belonged to her thanks to the DNA, so the player and Justin returned it to Jemima. She was happy to see they found it, saying she was so vulnerable when she lost it and none of the adults cared. In the end, Jemima agreed to help, but said they were having trouble with some illegal gambling rings in the hospital. Though she had no proof, she suspected Dermot McMurphy, a known member of the Irish gang. After finding money inside an anatomical doll as proof and arresting Dermot, Jemima thanked them and promised to make the hospital a safe place for the street children. 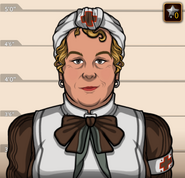 Jemima, as she appeared in Sinners and Saints (Case #19 of Mysteries of the Past). 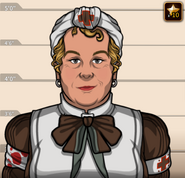 Jemima, as she appeared in Burning Bridges (Case #35 of Mysteries of the Past). 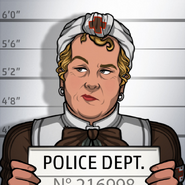 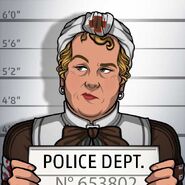 Retrieved from "https://criminalcasegame.fandom.com/wiki/Jemima_Hatchett?oldid=415364"
Community content is available under CC-BY-SA unless otherwise noted.