Jeb Redfern is a minor character in Criminal Case, appearing during the events of Lights Out (Case #50 of The Conspiracy).

Jeb is a college student and the son of Shane Redfern with brown eyes and short ginger hair. He is seen wearing a dark blue shirt underneath his black jacket.

Near the start of the blackout, Jeb was one of the people who wanted to take advantage of the situation to start looting stores. However, Gloria and the player arrived to stop the riots.

Later, Jeb and his brother, Willie Redfern, were discovered to have kidnapped Judge Powell for "heartlessly misjudging" their father, who had killed flight attendant Dolores Zamora in order to keep his job so he could provide for the brothers. After the kidnappers briefly resisted arrest, Rita shot Willie, causing the brothers to go peacefully. 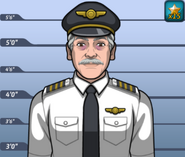 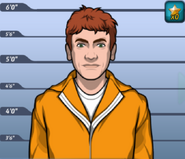 Willie Redfern, Jeb's brother.
Add a photo to this gallery

Retrieved from "https://criminalcasegame.fandom.com/wiki/Jeb_Redfern?oldid=460506"
Community content is available under CC-BY-SA unless otherwise noted.