High Commissioner Jean-Philippe "JP" Delacroix is a main character appearing in Season 8 of Criminal Case, where he serves as the High Commissioner and Profiler of the Parisian Police Squad.

63 years of age, Jean-Philippe has brown eyes, short gray hair, a five o'clock shadow and wrinkles across his forehead. He sports black-rimmed glasses and wears a white shirt with a navy tie under a cobalt police jacket with a silver leaf pattern on the collar and epaulettes with a matching pattern and silver buttons. He is occasionally seen holding a cobalt police hat with a silver metal leaf pattern and silver lining around the brim.

It is known that Jean-Philippe was a drag queen prior to his tenure in the department. He is also old friends with King Abioye of Mazunda.

Per his suspect appearance in Out with a Bang, he knows chemistry, eats foie gras and follows astrology.

At the end of the investigation, High Commissioner Delacroix and the rest of the team surprised Carrie and the player with the party, officially welcoming them to the team.

The Show Must Go On

Dressed to Be Killed

Out with a Bang

As the Profiler of the Parisian Police Squad, High Commissioner Delacroix has the responsibility of analyzing physical objects and/or clues that cannot be analyzed flawlessly through bio-forensics or digital analysis, but instead through psychological analysis, and to inform the team of such results after a certain amount of time or a speed-up process using Criminal Case Cash. His task-wait rates vary depending on the difficulty of the task, but they all cost 1 Criminal Case Cash per 30 minutes.

Below is the list of analyses High Commissioner Delacroix performs throughout the course of the game:

Case #8: Dressed to Be Killed

Case #15: Slay it with Flowers 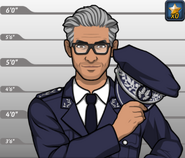 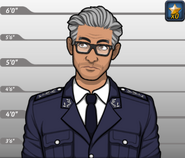 High Commissioner Delacroix, as he appeared in Party Like It's 1699 (Case #4 of City of Romance). 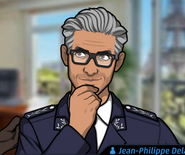 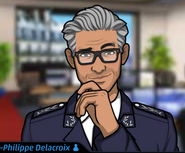 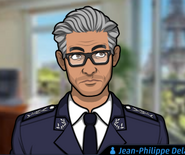 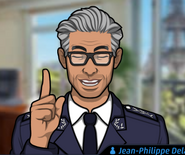 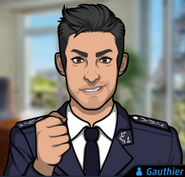 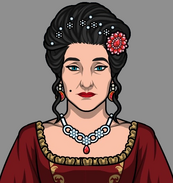 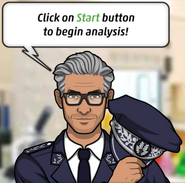 Notifying the player about the time remaining for the analysis to complete.
Add a photo to this gallery

Retrieved from "https://criminalcasegame.fandom.com/wiki/Jean-Philippe_Delacroix?oldid=547023"
Community content is available under CC-BY-SA unless otherwise noted.