President Jean-Marc Bonneur was a suspect in the murder investigation of agent Jonathan Stafford in Politically Incorrect (Case #53 of World Edition).

Jean-Marc is the 56-year-old President of France. He has short greying hair, and a red, white and blue scarf around his neck. He dons a white shirt with a blue jacket surrounding his shoulders. It is known that Jean-Marc hunts, goes to rodeos, eats kuchen, and is writing an autobiography whose test copy is named Le Chemin vers a Gloire.

Jean-Marc became a suspect after the player and Jack found his watch in the conference room. When asked if he interacted at all with the victim, he said he only saw him in passing when he blocked him from giving the President a kiss on the cheek. Though Jack was caught off guard by that, Jean-Marc said it was just a French custom.

Jean-Marc was interrogated again regarding his autobiography, which details a hunting incident where he accidently shot his bodyguard. He said that it was just an accident, and that he would never shoot anyone on purpose. He is aware that he was a terrible Hunter, but was working on improving it. When asked where he was at the time of the murder, he said he had something to eat and drink, then did some target shooting in the forest, and he swore that no one was around him this time.

Jean-Marc was later discovered to be innocent after the team incarcerated Sidney Hirsch for Jonathan's murder. 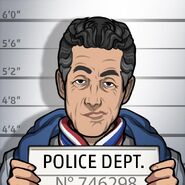 Retrieved from "https://criminalcasegame.fandom.com/wiki/Jean-Marc_Bonneur?oldid=533958"
Community content is available under CC-BY-SA unless otherwise noted.