Case #10: I Spy a Mummy (s3)
Jawad Rashad (Arab: جواد رشاد) was a suspect in the murder investigation of fruit vendor Afif Wahab in I Spy a Mummy (Case #10 of World Edition).

Jawad is a 40-year-old fruit vendor. He has black hair and wears a brown shirt with a scarab pin on it. It is known that Jawad eats pickled turnips and smokes hookah.

Jawad became a suspect after his fingerprints were found on a flyer of the victim. According to Elliot, he had the retail spot closest to the tomb, but the victim took it over. Jawad said the defaming flyer of the victim was just for business, nothing more. He was shocked to hear of Afif's murder, wondering who would want him dead. When Jack pointed out that the victim stole his vending spot, Jawad said he would never have killed Afif over a vending spot.

Jawad had to be spoken again regarding a box of candy sent to him by the victim, which held traces of laxatives. He said that Afif sent the candy because he wanted to poison him. Jack was skeptical that Afif wanted to poison Jawad with laxative-laced sweets, Jawad said he put so much laxative in them, he got hospitalized and nearly died.

Jawad was found to be innocent after the team incarcerated Zarah Salah for Afif's murder. 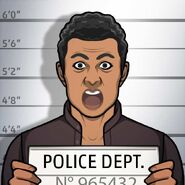